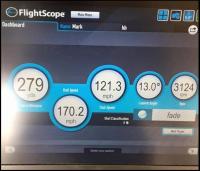 OK, so when Jerry “BT” Crowell and I began to talk about working together, he stated a personal desire to achieve 115 mph club cruising impact speed and a top speed of at least 120 mph.

Today, we reached the “Mission Accomplished” phase of that particular task.

Before I get to that, here is a text message from Jerry after he’d reached the milestone, on how he knew something was happening with his swing:

Little Jack was chipping the other day (front side of range) when I was on the back. I flew it to him and almost killed his dad! I figured something was up and I better get on the radar! CONFIRMED!!

So: Jerry was texting me a few minutes back, saying that he was getting close to the 120 mph mark in club impact speed.

Then he sent this:

So, starting the 2016 season, Jerry’s going to be hitting the links with a cruising speed closer to 116/117 mph and a top speed of 121 and climbing, with a cruising ball speed easily over 165 mph.

Did I mention that he turned 50 this year and is officially swinging faster and much, much longer than he did at half his age?

And he didn’t do this in a couple of balls and lose steam – he got faster as he went on, until he cracked it:

I can’t wait to see this in person in a couple of weeks.

It is possible, even at 50 years of age, that he’ll be the longest, surely one of the longest drivers in the upcoming Farmers Insurance Open qualifying round at Del Mar CC next month.

And, since I’ll be caddying for him, I’ll definitely have a good idea of what he’s doing against the younger players.

And congratulations to Jerry – 120 and 170, big guy, just like I promised you.  A slight detour while I finished up my theory work, but you’re there now!