Spoiler alert, no, I’m not shocked that Bryson DeChambeau’s injury WD in the Saudi event a few weeks ago wasn’t actually caused by a slip and fall while playing Ping Pong.

That was a ridiculous assertion considering his string of WD’s with injuries before the Saudi event, but I’d imagine BDC didn’t want to admit accepting appearance money while not fit to actually play.

You’ll remember my not liking DeChambeau’s particular move through impact where I said it was giving me nightmares?  Hang on to that thought for a second.**

Now, call me cynical, but this article I just read from Golf Magic’s Ben Smith was shocking, because I thought his present injuries were merely muscular:

DeChambeau faced the media ahead of the first major of the year where he admitted he was approximately 80 per cent full fitness.

Interestingly, he admitted doctors told him not to play but this major only comes round once a year so he felt like he had to give it a go.

I’ll add right here that competing while injured is madness.  It’s one event. That’s all.

Moving on, because I have a massive “Told You So” incoming:

The 28-year-old told the media his left hip labrum is still bothering him slightly after he tore it around two years ago when he started speed training.

He aggravated that injury, he said, when he was speed training on concrete and slipped but “didn’t talk about it too much” because he felt fine.

So that whole story of slipping on the floor at the Saudi event – there’s a huge difference between incurring injuries in the fall and aggravating already existing injuries, wouldn’t you say?

He tore his left hip labrum two years ago and admits freely now that the wrist injury was almost assuredly caused, again, by hitting balls and not slipping and falling on it.

Not to mention, the slip story is a convenient cover for WD’ing from a paid-to-play tournament when you WD’d from your last event preceding it… due to injury.

**Now, the part where I raise my arms and say, “Did anyone really not see this risk?”

I wrote specifically about the risk to DeChambeau’s leading lower body (ankle, knee, hip) the way he was swinging.

In DeChambeau Is Giving Me Nightmares, I said: 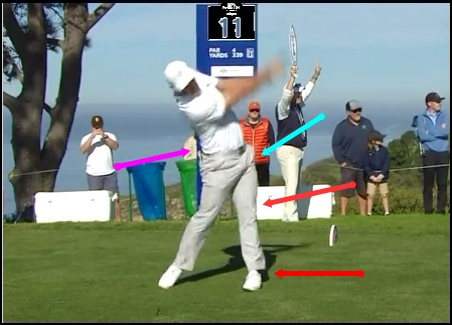 Starting with the lower back (magenta arrow), left hip (powder blue arrow) and the lower leg knee & ankle (red arrows), this man is ticking injury time bomb, and I don’t mean a little one.

Little did I know that he’d already done his hip before I even called attention to this risk with the way he swings, but I haven’t been following golf much at all in the pandemic years, so he either said nothing at the time or he did and I missed it.

Again in Why You Absolutely Don’t Want To Swing Like Bryson, I again pointed to the risk of injury to his leading leg with that spinning-out on his left heel move: 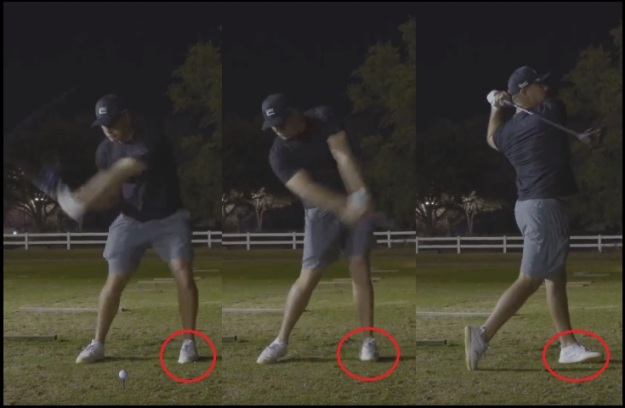 Second, imagine that he doesn’t time that spin perfectly, leaving his foot in place just a fraction too long, or even worse, he catches a snag either with his soft spikes or just a tuft of turf that keeps the foot from spinning out.

You’re talking about blowing out something, and badly, with the force he’s generating.

Blowing out something, like your left hip… and he’s been swinging and playing like this for quite some time, so the prospects are not good at all.

You can not play golf with a bum leading hip and the fact he’s playing injured is likely not going to change – the hip issue is from the way he’s swinging, not “because of speed training,” although he for sure injured it doing speed work if he was doing it the way he swings on the range or tee block.

As an aside, I’ll say with absolutely no medical education myself, that you could also likely injure your wrist bones by doing this through impact at 130+ mph:

So, he’s going to need a swing change or more and some lengthy time off to heal properly, or he’s going to keep doing what he’s doing and be unable to play by his early 30’s.