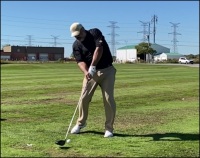 I was struck today watching the Pro Long Drive World Championship when I had a glance at the Seniors Final, after I’d taken in the Open Final yesterday.

Right off the bat, what I noticed was that the Senior swingers have far better technique than the younger Open competitors, and the reason for this is obvious – the older you get, the higher the risk of injury in something like a high-powered golf swing, so you’d better get mechanically-sound if you don’t want to snap something.

I’ll start off before saying anything about my own swings by wishing Ryan Winther (2012 Remax Long Drive Champion) good luck and a speedy recovery – I hadn’t seen him swing in a few years (we discussed the long drive swing from time to time between 2013-2016) and he snapped something badly on the very first swing in his second round.

It may have been a separated shoulder or broken ribs, but Long Drive competitor Will Hogue was on scene (he’s a firefighter by day) and was able to deliver First Aid, and passed on the news later without any further details that Man Bear is going to be OK.

On to the post at hand – you don’t have to jump out of your shows to produce leverage, power and thus speed in a golf swing – you just need to harness proper leverage using your body and the weight transfer from foot to foot.

It’s actually easier to see that quiet power in a different angle from the usual two, such as the reverse angle and the front diagonal.

It is easy to see the loading into the trailing leg and hip on the back pivot, then the transfer back to the leading foot, which powers the downswing leverage.

The ironic thing is my swing action, and those of other proper Classic Golf Swing practitioners are quieter than the so-called “fewer moving parts”Modern Golf swingers, who are flying here, there and everywhere at all parts of the swing.

And of course the requisite impact still showing all of the good stuff when you get a solid impact position:

Weight fully into the leading foot, right-leaning spine, head over the trailing knee and the club head having reached bottom just before impact.

From the front diagonal view:

You’ll notice very well on this angle that the left arm action is over at impact, whereupon it begins to collapse as the right arm straightens through post-impact.

These are segmented parts I’m talking about, but of course, you can’t perform these separate actions deliberately as they occur far too quickly.

You simply have to build the setup to allow that motion to occur correctly.

So, I don’t know what all of those weight training drills are supposed to do as the exercise has people pulling laterally from behind and out in front of themselves to the other side.