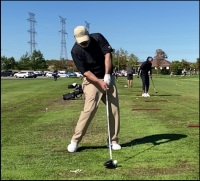 Not perfectly executed (a little too wide a stance for perfect), but here is what I expect to see from myself swinging according to the MCS Classic Golf Swing model.

I have never been happier looking at my own swing, and to be honest, these swings are definitely good enough to feature as the swing for an MCS video, finally.

Another great aspect is that the conditions for video were perfect – cloudless sky, bright natural light, and clothes that didn’t fade into the background. 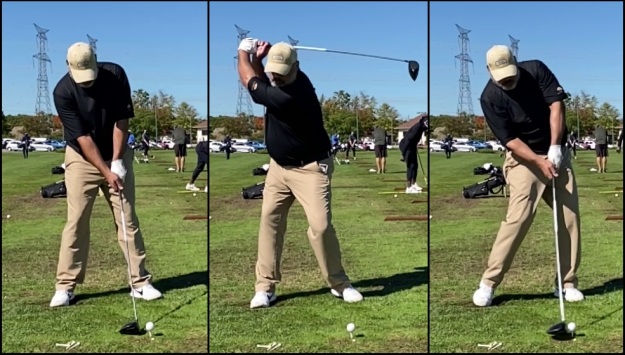 I’ve actually got swings from four angles: face on, down the line, front diagonal and from behind, so bear with me while I edit the video clips, please.

For now, I’ve just had the time to create two Gif.s from the standard angles, and I’ll be at the editing later tomorrow, but my work for the day is done!

There are those among you out there who will remember that I’ve had pretty wide stances in my day, with a very pronounced “short-stop slide” foot release, which is perfectly mechanically-sound, but above, there is barely any, and the difference is how much I narrow my stance to get it optimal.

When I nail the optimal stance width, I’ll be there, because right now, there is absolutely nothing wrong with these swings aside from they could be improved marginally in the setup.

Everything else is there: proper “Leaning A” balance, grip, posture, ball position, alignment – the whole ball of wax.

It took 14 sessions to get where I wanted to be from last winter, after I’ve solved each of my swing issues one by one, and it seems like it took forever, but when you stretch 14 sessions out over 4 months, it feels like an eternity since Day 1.

So, what you see above is not the only way to swing, as there are infinite ways to swing a golf club, from horrifically wrong to perfect, if it exists – but it is the proper way to swing based on how the body is built and moves.

For maximizing power, accuracy and consistency, with the least amount of risk of injury, this is how you do it, friends.

Unless you think it’s a fluke that an overweight and very out of shape 52 year old guy who only swings once or twice a week at present just happens to blow balls past the end of the range when most of the swingers on the range are struggling to find the back flags at which I hit 4 and 5 irons.

It ain’t the guy, let me assure you – it’s the swing model.

So, if my luck holds and I get another day like today to hit some wedges and irons before they close off the grass decks and go to the mats for the rest of the season (usually sometime in the second week of October), I’ll have really good stuff for a video.

If I’m not fortunate, I’m sure I’ll be able to get passable swing clips from the TracerGolf facility around the corner, but I’d much prefer my luck holds and I get some grass deck iron clips to go with the Driver.