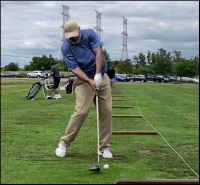 I thought, coming home on Tuesday afternoon, that I had not made any significant progress on the finalization of the swing model.

I’ll say right now that I have doubts about the weak grip – and that’s why I advised anyone swinging MCS at the moment not to make any changes, because I haven’t made a determination on it yet – while it may have been used by the swingers about whom I’ve been talking, I simply couldn’t make a weak grip work in the swing.

It could be that I need to do more setup work, but if it’s that difficult to perform, it is highly unlikely to be optimal, which is the setup I’m after.

I’ll see what happens as I continue investigating the matter.  Right now, I’m thinking that Nicklaus et al who had very weak grips (excepting Hogan, who was on some other trip with the entire swing) were doing something else, sort of a mass idiosyncratic move that I don’t do myself, to make it work.

Or it could be a rabbit hole.

At any rate, I took a cooling off break in the vehicle for about 5 minutes with the aircon running, then I went back and just hit some drivers, without working on anything, just to see how the motion was:

On another note – I have a sneaking suspicion that something I’ve been sure about at times, only to change my views on it, that the real problem of the golf swing is not one of technique, but simply because of the difference between the setup position and that of the impact position.

I won’t say any more about that until I’ve investigated a little more, but it’s something in my modeling research that keeps coming up and that I’ve kept discarding – but now that I’ve solved every other issue in the model and I’m still not happy with the 3 to 9 phase of the down swing, it’s possibly time to take another look.

It’s almost there, and I know it’s nearly there – but that last 5-10% is the hardest to nail down when you’re looking to get from pretty good to optimal.

I didn’t come all this way to say “Good enough,” because I could have stopped five years ago.

I’m after something more than “Good enough,” so the work continues.