I know most people will be taking in the Open Championship today and I’ll be out until the afternoon, so I thought I’d just put up something light before I head out.

It always tickles me to see people launching themselves into the air and analysts saying that it’s to create “vertical lift” on the ball, because the club face is what’s making the ball move from it’s teed position and not the swinger’s body or feet.

I already showed that the most notorious “jumping foot” golfers actually have very little positive launch angle even with that move – because we know that the flying foot has nothing to do with attack or launch angles, right?

I was just looking at my recent session’s swings and decided to see what the launch angle was on one drive that I really sent (low spin and high launch angle are key to maximizing drive distance), and it looks around 14 degrees, believe it or not, with an 8.5 degree lofted driver.

First, let’s look at the actual swing, and take note of the leading foot at impact and through to the finish:

It certainly isn’t the flying foot that does it!

It’s about Attack Angle and what it creates, the Launch Angle.

I see some things here that are emphasized by the protractor lines, even with this less-than optimal setup and swing, that I really like, such as the ten-degree spine tilt from vertical: 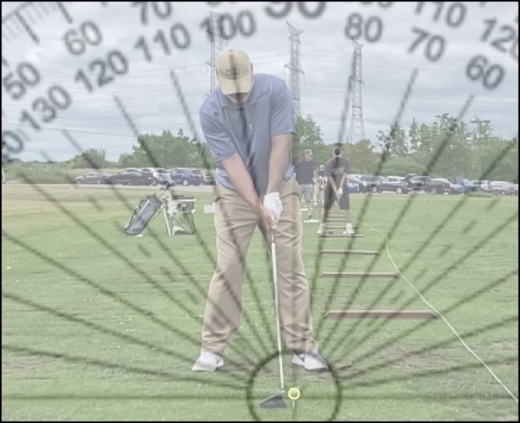 … as well as how the ball sits on the vertical protractor line touching my left (leading) shoulder and heel.

Club shaft is slightly back-leaning, as we know should be the case with the driver at address.

Coming into impact, the head is still on the protractor line but the hips, which were just touching the vertical ball line, are well past it, indicating a vigorous transfer of weight to the leading foot: 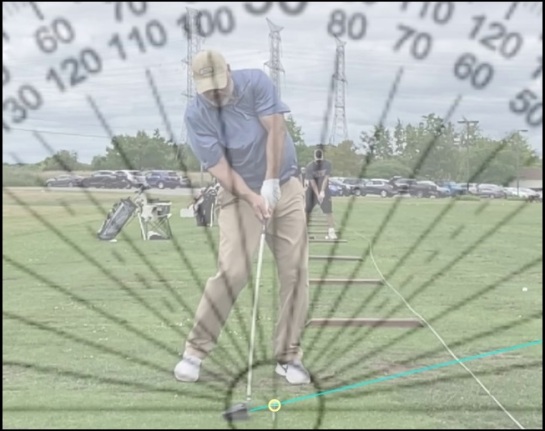 … and the club head is reaching swing bottom with the hands still behind the ball.

Post-impact, the hands are now reaching the vertical ball line but the club head is long past that point: 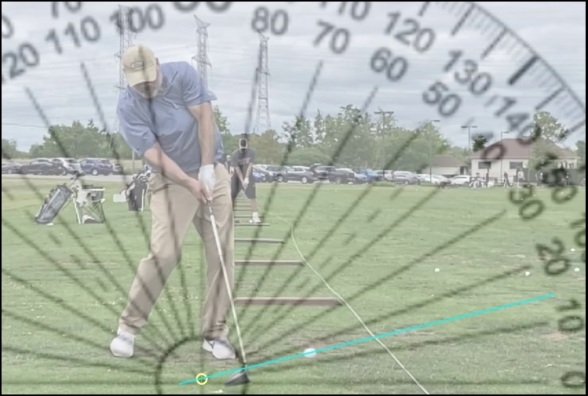 … and everything about my body position and club shaft angle at this point is shouting, “High launch, low spin!”

So, these are all positions that you cannot create consciously during the swing (except for the setup, which is why the setup is king in the swing – you can control every aspect of it), as it happens far too quickly.

What the positions tell you is that I built a proper setup and simply swung back and through with proper weight transfer and hip & leg pivot action.

This all goes to strengthen my argument that the setup is the most important part of the swing, whether it’s a wedge or driver – you can’t make the correct motion from an incorrect position.

An optimal setup should set the stage for the optimal swing motion (you can still mess it up but you’ll never, ever get there from an unoptimal setup), and I’ve been doing nothing more in my six range sessions this year than to find that optimal setup so that I can simply swing back and through the ball.

That setup includes everything from where the ball sits in relation to my feet, my stance width, posture over the ball, weight balance and spine tilt, how close to (or far from) the ball I stand, and of course, how I hold the club (grip).

As we know, I hopefully on the last step of that setup rebuild and we’ll see how things look the next time!

Happy Open Weekend to all.