Let’s have some fun with technical analysis in this posting, shall we?

Instead of being enraged by something I noticed wrong with my swing yesterday, it gave me a delayed (after the annoyance phase) sense of satisfaction that I’m actually proving my theory in real time.

I mentioned my feeling yesterday that, looking at the video from the range session Day 4, I had a power leak occurring somewhere around the 3 O’Clock point of the down swing.

As stated yesterday, I was happy with the change in setup and with the fixed pivot action from which I had strayed, but that I didn’t like the down swing from the transition to the finish.

What didn’t I like about it, even though this swing produced a drive that traveled over 330 yards (and could have been even longer)?

In a word, everything:

Power leak, power leak – where is the power leak?

It only took long enough for me to glance at a new comparison between Jack Nicklaus’ setup and mine in 2016 and again from my setup yesterday to see what the problem was.

Now, I’m not saying Jack Nicklaus’ swing was perfect, but it was, as I like to say, closer to my theoretical optimal model than any other swing, including mine.

I referred to this a couple of posts ago where I mentioned that, aside from my left-dominant aspect (painfully obvious now), they were nearly identical.

Not quite true, however – there was one more issue, and when I made a new comparison pic yesterday, it jumped right out at me even though I was looking at the video and wondering what it was.

Can you spot it?

Whatever it is, it is causing that extra bend in my leading (left) arm and it caused all of the issues I bulleted in the things I didn’t like about yesterday’s action.

Well, time’s up so I’ll tell you – it’s the overly strong grip in both pictures, and the bend in the leading arm is caused by that.

The strong grip causes the arms to get out of whack – if you look at my down-the-line: 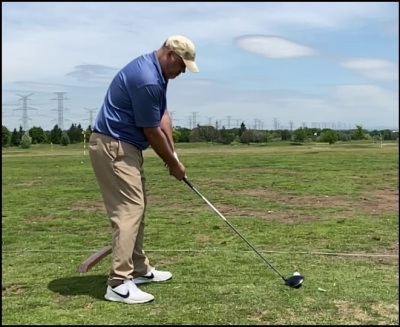 …..  the left arm is prominently visible when it should be nearly or completely hidden by the right arm.

I initially thought, “Dude, you’re still emphasizing the left arm and this is causing all of the issues,” until I saw the strong grip and everything instantly made sense and I can prove it to you:

Hold your arms out horizontally, palms flat together, and turn the hands so that the back of the left arm faces upward.  Now, notice what it has done to your neutral arm position.

The left forearm is now over the right.  So, even with a right-dominant action, the arms are not in a natural position, as seen both face-on and down-the-line.

So, why was the strong grip interfering with my desired optimal action?

Because the body is a wonderful thing – my hand-eye coordination knows even if I’m not consciously thinking about it that I’m going to snap-hook the ball off the planet if I swing naturally through the ball, so my pivot is affected (over-turn, club goes past parallel) and I now have to shift toward the target with my body and hold off the release until impact (think Paul Azinger), and there you have everything I didn’t like about my downswing.

I had to spin out through impact, starting right from the transition (and I felt it on some swings) because of that strong grip and there goes the natural action.

I’ve had a stronger than neutral grip forever because right from the time I began to get into golf, I fought a pull-slice (we all know why now) and the easiest way to counter the open face at impact is to strengthen the grip.

That of course means that there are times, even though you are a fader and hit slices from time to time, you’ll also bring into play the pull-hook when the face is way closed at impact and you’re cutting left across the ball.

And remember I quit playing golf in the 90’s because of that double-cross.

I had made efforts to fix this problem but it obviously leaked back into my setup, and fortunately it’s an easy thing to fix, because it was an instinctual error.

I swing my swing aid with a neutral grip – in fact I had actually pulled it out halfway through the session to try to figure out why I was spinning through impact.

Like I said before, perfect swings are easy when you’re not standing over a ball and have to hit it.

I just didn’t realize I was changing my grip from swing aid to club.

So I was annoyed when I initially saw it, but then I was soothed by the realization that it actually goes to prove my assertions both about the MCS Classic Golf Swing model theory and that if you change one essential component (“I like DJ’s model – but I can skip this part and still build the same swing action”), you’ll not get that optimal action everyone wants whether they realize they do or not.

And the optimal grip is a neutral one.

If you disagreed on that, now you know why it is so.

So – was I making bad swings yesterday?

No, they were pretty good swings, I was hammering the ball – but they weren’t optimal, and I haven’t come all this way to leave everything at, “Not too bad, my work is done here.”

2 thoughts on “How Close Was I To Optimal? I Think One Thing…”