I won’t be posting any irons swings from Monday, simply because I can barely stand to look at them, so they’re not worth posting.

I had said that it would take a little time for my swing to settle down after fixing a huge setup and mechanics flaw (swinging with a left-dominant arm), and I’m in that in-between place at the moment but not complaining.

That is because, after just two sessions at the range, I have made the grip change (to standard) that I implemented back in ’19 permanent (it was at the end of the season and I didn’t really have a ’20 or ’21 season), and the right-dominant setup now feels normal or natural.

What I didn’t fix, looking at the video, was the tendency to still be more left-oriented than right, but I’ll get to the breakthrough on that in a minute.

When looking at the down the line, I had no real complaints other than it wasn’t yet up to the motion and setup I’m trying to nail, but both were closer, which can’t be complained about after two sessions.

This was a drive that the SC300i read as total yards 297 which we can calculate more accurately with my laser measurement of my targets as more around 330 yards, give or take.

The down swing action was much more to my liking than previously with the left-dominant yanking from the top and while I was still pulling hard, the club dropped more smoothly into the impact plane because I was now set up with the right dominant arm position:

That’s the good stuff, and I don’t know about you all, but that’s about as smooth as I think I could look at the moment driving the ball that distance.

What I did notice was that on my hardest swings, like when you say, “Let’s go after this one,” I was spinning out slightly on my leading foot.

That means too much rotation through the bottom, and I knew it while at the range.

When I got home to look at the video, I could see it.

I had two distinct actions when looking at the face-on – a very visible shift and loading on the back pivot and then a shift back to the leading foot to begin the down swing phase:

There is no doubt I’m getting all the way into that leading foot!  Upon closer inspection, a little too center-biased with the head, which was causing that disjointed double-action rather than a smooth, seamless one from start to finish.

Other than the driver however, I couldn’t find anything good about the iron swings, as I felt they were far too left-biased at setup.

I may just tee the ball a little lower as I tend to swing very close to the ground at the bottom of the arc and it felt I kept catching the ball high on the face (the sound is not the same as when it’s perfectly on the sweet spot). 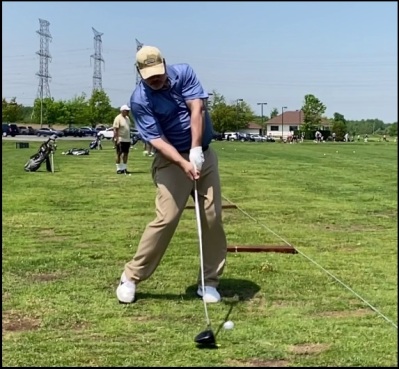 I don’t know why long drivers feel they have to tee the ball up a mile high – just because you’re trying to get a positive attack angle on the ball doesn’t mean anything, as you can see in the impact still pic that I’m getting the ball with the shaft leaning backward and I’m still getting slightly under the ball at impact although it’s on a standard length tee.

Now, to the breakthrough.

After I looked at the video, I spent Monday evening watching television (it actually watched me while I thought about things) and wondering what I wasn’t getting.

When I got back up after several practices of setup and slow motion swinging, it finally hit me late into the night before I retired.

I could barely believe how tight it was supposed to be, but when I got up yesterday after sleeping on it and letting everything marinate, I began the work with the swing aid.

Sure enough, it didn’t take me long to begin to snap it from the new setup.

This would never have happened, never mind so quickly after the session, if I hadn’t fixed that left-dominant issue.

I’ll spend a couple more days getting used to the new feel of the setup and motion with the latest adjustments, and then I’ll go again.