I have been going through my Mike Dunaway library and once again, instead of taking the word of the participants at face value, I decided to take a closer look at hiss pivot in the Peace River video.

I wanted to see how it compares to the “compound pivot” or “shift & post” or “shift & tilt” (shift hips, tilt spine) action that that is the staple of the Mike Austin school of swing.

With apologies, I again don’t see any shifting of the hips or tilting of the spine – in fact, if there is any change in tilt, it’s in the opposite direction, where Dunaway’s spine is more vertical at address and tilts to the right as his head shifts over his right foot.

The hips do not shift other than slightly to the left as Dunaway presses into his leading foot to trigger the swing, but they simply move right back to their original spot as he pivots, and they rotate without passing the position of his address stance at any point.

The only shift is of Dunaway’s head, which is very centered in the pre-swing address, then shifts to over his right foot by the top of the pivot, where it will remain until impact on the down swing:

So, no “floating pivot” here with a stable head during the back pivot, but still not what I’d call a “shift & post” action or anything very different from the Classic pivot where the hips turn in place.

So, a different setup than in the Sybervision video, where his head is more right-biased and barely shifts on the pivot:

If you go watch Dunaway’s swings in the Austinology DVD, you’ll see the same thing – the pivot being described one way, but performed completely differently when Dunaway is hitting balls.

I’ll show that in my next posting but really, looking at the thumbnail on a Youtube clip of a portion of the Austinology video series, Dunaway absolutely never pivoted in the manner he’s demonstrating it in the second frame, with his hips moving to the right and his head moving or staying way left of the hips: 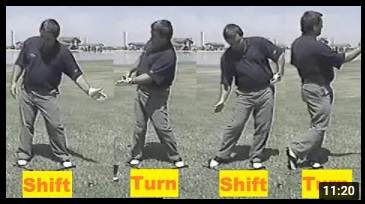 So now we have a mystery in that Dunaway’s swing was labelled “perfect” by his mentor, yet doesn’t perform the “shift & post” action he described and demonstrated in his own videos, don’t we?

Well, there may be a mystery so some, but in the time I’ve been breaking Dunaway’s swing down frame by frame this week, I believe I know the answer.

That answer would be, “It doesn’t matter what the hip & leg action are in the pivot, but rather the top position, in which you create the conditions for maximum leverage created when the body weight shifts back to the leading foot in the down swing transition.”

It is the top position that matters, which is where the leverage is created, not how one gets there, and of course that’s my belief until I can do several things:

This summer just go so much more interesting and fun for me, because I love research!