It’s interesting to go back to see what was going on with the MCS Classic Golf Swing model over the years.

Below, you see the two setup:

… with the differences in the actual theoretical model being:

The ball position change allowed me to not have to turn so quickly to square up the club face and having a negative attack angle to now a very positive attack angle, up to 6 degrees when I want it.

You’ll also notice the much stronger grip with the lower hand in ’15, not as strong in ’19, and now when you see the next video of my swing this season, you’ll see a proper neutral grip.

Funny enough, I was a power-fader in ’15 and with the weaker grip in ’19, I was a baby-draw in my natural swing.  These things came not so much from a model change but from my getting closer to the theoretical model with regards to my plane at the top of the back swing.

Now, an interesting point would be to note that, even with the differences in the setup & action (I’m staying taller in ’19 versus a slight squatting in the back pivot in ’15), I was still clobbering the ball with both swings because the most important part of the swing itself is at impact: 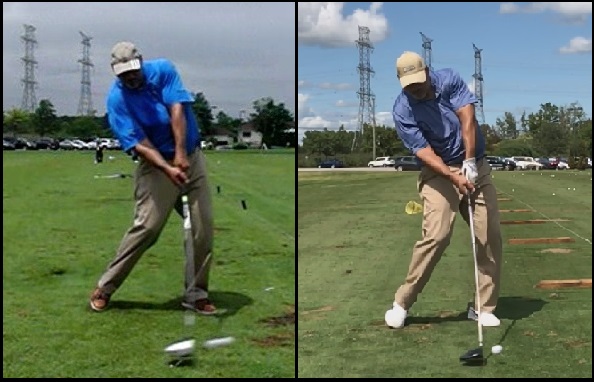 You don’t hit 500-600 balls per session for years without learning & knowing what the optimal impact position is, plus you’ll see the same thing in all of the great Classic era swingers, more or less:

What would have changed in my impact (club path, attack angle) aren’t visible but what you can see is a nearly identical body position in the optimal impact – weight into the leading foot, releasing from the trailing foot and the spine leaning away from the target.

This is another thing to illustrate the importance of the setup – whatever the setup, you want to be in the above position for driver impact, so the better the setup, the less compensating you have to do during the actual swing to arrive there.

Setup, setup, setup.  That’s the model, because from the optimal setup, which I believe I’ve now nailed with my swing work, the motion becomes ridiculously simple for the infamously “complicated” golf swing.

To repeat the “E = MCS” phrasing, it’s “One Major Move” for the back swing with the weight shift powered by the hips & legs, then stepping into the down swing and throwing the club down & through around to the finish.

I’m looking forward to the next few weeks passing quickly because I’m eager to compare my 2021 MCS Classic Golf Swing action to the two swings above!