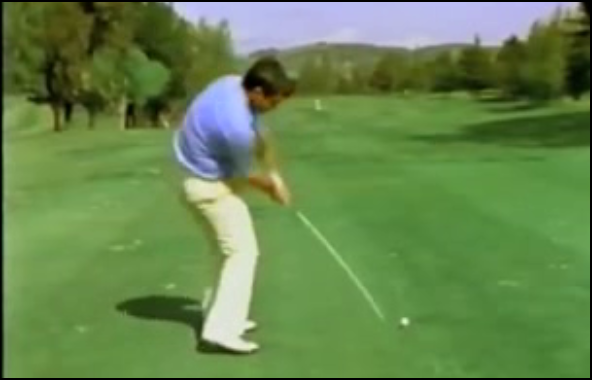 Of course, it’s never quite as simple as any title implies, but I’ve spent 18 months working quietly on the Dunaway model.

I can verify that while I came close to it during this time, I’ve only nailed (in my mind) the swing action from A-Z after I really got the setup measured.

The arm action itself is very straight-forward – it’s the lower body action that is the key to replicating the Post-Modern Swing pivot and that is utterly dependent upon the setup.

Get that wrong, it doesn’t matter what else you’re doing with regards to the arms, hands & wrists.

Of course, the drop & “throw release” are very distinctive in this swing action however the leg action is where you immediately differentiate the model from any other type of swing model.

While Dunaway at one time had a “short-stop slide” action in the lower body & feet:

… which you see in other swingers, myself included, this swing if you don’t look very closely, resembles the Classic Golf Swing type of action that all of the Classic Era greats used, until you notice that there is little to no heel lift in the backswing!

You know it isn’t a Modern Golf Swing type because even with the minimal heel lift, there is no twisting of the lower back and you have a free hip turn on the back pivot.

Which means it can’t be an MGS model.

In the later versions of Dunaway’s swing, it is the signature “step-around” finish that really separates him from any other swinger.

I’ve never seen this in any other swinger but him:

I prefer the step-around finish because it means that Dunaway’s feet are firmly planted for the duration of the entire down swing until impact, at which point the heel releases and Dunaway then steps around to the finish.

I would wager that, if Dunaway had swung this way in the days where he had a sliding release, he’d have had more power than with the slide-release, if even just a little. I just see more “oomph” in that move where he’s older & heavier.

Of course I will of investigate this when I get back outside and can swing for myself with some launch monitoring using both release actions, but it seems visible to me that the second swing finish is the one you want if you’re “nailing” Dunaway’s model.

Right now in my swing work, the MCS Classic Golf swing model produces a slide-release, whereas my Post-Modern swing produces the step-around.

All that remains is for me to actually hit some balls to see if my little theory is correct on which one you’d want for the Post-Modern model.

When I’ve verified the accuracy of my prediction, I’ll be able to share the reason they’re different finishes for the two models.

Back to my original point – it’s all in the setup. If you’re not set up correctly to the ball, you won’t get a pure Dunaway-type swing action, especially in the lower body.

Without the correct setup, you can’t make the correct pivot action & you won’t be able to get the pure drop & “throw-release,” nor the delayed step-around finish.

It truly is a kinetic chain & if you break any link of that chain from setup (which includes grip & ball position) to impact, you won’t get the benefit of this superb swing action.

I can’t say definitively if I could swinger faster & drive it longer using the Post-Modern over the Classic model, but my guess is I will & this season will be the proof of it if & when I’ve nailed it.

But I first had to perfect my setup for this action, which I’ve spent the winter working on doing so.

Next will be the proving ground, when the range opens again & I can get back at it. I don’t mind the lockdown delaying the start of my season though because I’ve done some great work on this model even in the 10 days since everything locked back down just as I was about to hit the range.

Like I said in the previous post, I don’t improve my swing hitting balls, I only get more consistency from practice.  Improving my swing takes place in the “lab,” my work space at home.