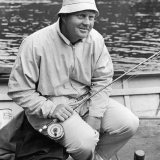 Carrying on the thread from Part 1 of the Recapping MCS, I was discussing Jack Nicklaus & one of the main reasons for his greatness.

Of course, he was a capable athlete, having also played football and basketball, and he was a keen competitor & had a very high golf IQ (knack for the game, for want of better wording).

The main gift however was that his swing was so close to what I deem the “optimal model,” he was able to win 70+ Tour events & 18 Majors while fishing more than he played, because the closer you get to the optimal model (huge bonus here), the less you have to work on it.

Jack Nicklaus didn’t have a “perfect swing.” No one does, at least no one yet… what he had was a golf swing that comes so close to what I call optimal, the MCS Golf Swing model built from watching countless swings of greats and personal research hitting balls on the range and golf course.

I’ve always said that there is no “perfect swing.” Or body, for that matter. Rather, there is a motion model for optimal performance and the closer you get to that theoretical model, the better you will perform.

Take someone who is of extraordinary athletic ability & physique & have them nail the theoretical model (or get close enough it doesn’t matter), you get Usain Bolt in the sprints in track & field.

Bolt’s running technique will be analyzed for years to come until someone comes along who does it better… don’t hold your breath, but someone eventually will, if not tomorrow or in ten years.

You’ll all remember in 2018, I went to the golf lab to get numbers, brought them home and analyzed what I was doing on paper, then went back a couple of months later and improved my swing numbers while not having swung more than 3 or 4 times in the month preceding my second trip.

That’s because I’ve come close enough to the optimal model that practice isn’t going to make me better – improving or getting closer to that optimal model in my swing will make me better, and far quicker than hitting a million balls with a lesser model.

Practicing will make me more consistent (which is why I don’t play golf hoping to shoot 65 when I barely play at all these days), but a better version of the optimal model will make me better.

I and anyone else who has played, say basketball, will tell you that if one had done one’s due diligence in practicing one’s free throw technique, one could pick up a basketball years after not having shot a free throw & very quickly get one’s form back. The better the form, the quicker the return of said form.

I have actually only made one major change to the MCS Golf Swing model since 2014 – that would be the change from “one should stand at an angle to the target line with the Driver and longer club, the angle decreasing with each shorter club” (which Hogan did, so it’s not something I invented), to “one should stand square to the target line in one’s foot stance, for a standard shot.”

Those of you with the “E = MCS” video will know how I arrived at that change – I changed the setup procedure from “setup to the ball,” to “set the ball up to yourself.”

The reason my swing looked different year to year and hopefully better year to year was simply that I spent so much time building the model, it has taken me time myself to get closer to the model with my own swing.

First I had to build the car, now I’m getting better driving the same car with each passing season.

Back To The Original Point!

So, the stance is part of the model & is as important as if not more important than anything else you do regarding the golf swing.

What you’re trying to do is take nerves & manipulation out of the equation & just swing. I’ve hit some very squirrelly shots in my day because I did something wrong in my setup & than proceeded to swing for the fences.

You practice and drill the model until swinging the club is practically an unconscious motion and, under pressure, you’ll perform better knowing your technique is on par & there’s no reason to fear missing the shot.

Or how Mike Dunaway could stand on a tee box and hit or come close to a 375 yard par 4 green with ball after ball. It has to do with technique, and the technique starts & ends with the Stance or Address Position.

Now, imagine the Iron Byron robotic machine or whatever the machine is called – imagine you set the machine up improperly to the ball (too far away, too close, at an angle, etc) and then stand back and let it swing.

Not on your life.

We differ from robots in that we can actually stand improperly over the ball with a non-optimal grip and hit enough balls to actually get consistent performance with manipulation and compensation – sound familiar?  Yeah, my hand would go up too, once upon a time.

But what happens under pressure?

Or have you heard, “I was having the greatest round ever and then one bad swing ruined my round…??”

That’s what happens under pressure – the more compensations you’re making in your swing more drastically things can go wrong when the nerves kick in on a shot over water, a drive with OB right, etc.

So, the first key to building that optimal swing action that will allow you to just swing, is the part from the ground up – the Address Position or Stance.

The optimal stance will allow you to swing with little to no risk of injury (but remember any athletic motion can result in injury for a host of reasons that don’t include improper technique, as when a sprinter pulls a muscle during a race), it will give you the most speed, power and precision you can muster on a consistent basic, and it will let you begin to have the confidence that you can simply get over the ball and pull the trigger.

End Note: You’ll also love the little tidbit of insight I gained working on Mike Dunaway’s swing model, those of you who are keen to learn it. 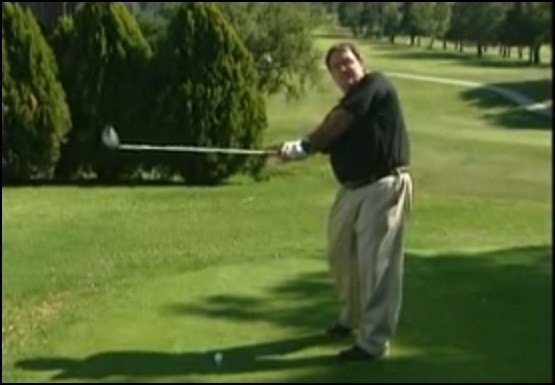 … shows what happens when you swing the way the body is built to move.

The picture is from one of the videos Dunaway helped to make on the golf swing and while he used this particular way of swinging to demonstrate releasing the club into a hanging carpet, it is actually a startling example of how our brains short-circuit when you put a golf ball on the tee or ground instead of waist-high.

More on that later!