Part I Of A Series

I said in my last post that I would call the MCS model based on the “shift-and-post” swing model pioneered by Mike Austin the “Dunaway” only because the model I built looks exactly like how Dunaway swung and not Austin.

That said, the two swingers I studied worked off the same model, just with slightly varying stance and subsequently motion (Austin for example had a slightly wider stance than Dunaway used & he had more heel lift on the back pivot and impact position), so I looked at both to build the MCS version.

I have noticed that when one explanation or demonstration wasn’t quite clear for me, I would turn to the other swinger and most times get the clarity required.

On the pivot for example, I found it tricky to get the “shift-and-post” action the way I wanted it to work after having left that model in 2013 and having spent six subsequent years working on the “floating pivot” action based on Ben Hogan’s pivot.

Six years of swinging that way had ingrained a certain motion in my hips and legs that I had to over-ride with hundreds, thousands of reps of the drill I devised to get the desired action.

I started with the setup that Mike Dunaway demonstrated and explained in his various instructional videos and, when I got the right pivot action going, I immediately noticed that it wasn’t so much the way he described the pivot but the way his mentor, Mike Austin did.

First, I got accustomed to the action using Dunaway’s demonstrations:

… until I could feel everything moving seamlessly and eventually made the action that I knew was bang-on.

When I made the perfect pivot action, I felt the same action that M.A. demonstrated in his own instruction.

Looking below, you see the action of not a hip turn but the shift & post or “compound pivot” action which moves the hips and legs exactly the way one walks:

This synergy repeated time after time.  A piece from one, a slice from the other, and the result was what I wanted and needed to add to the puzzle of the swing from A-Z.

The one thing I did myself that neither did was find my perfect stance width not by using a measurement (that doesn’t work because everyone is built differently and one person might need a slightly narrower or wider stance than mine if I used precise ruler measurements), as M.A. did.

That said, I sill used Austin’s method of “measuring” the address and found (what should be) my optimal stance width by repeating what I had done in building the MCS “Classic Swing” model explained in my videos between 2014-2018, the “MCS “Ben Hogan Project” to the “MCS Kinetic Chain” videos: 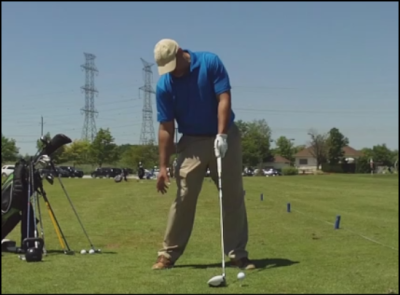 I found my optimal impact position with this model and then I knew exactly what my stance width should be.

I’ll never have to fumble around with the stance width ever again, because getting into one’s address or setup takes care of that if you know what your optimal impact position is.

I’ll be discussing more of this in subsequent posts – I’ve had a whole winter to think about and work on this swing in my spare time, so there’s lots to come!