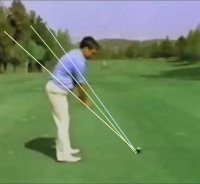 As I said before, this would be an MCS swing model using the principles of the “shift-and-post” mechanical swing model pioneered by Mike Dunaway.

If anyone wants to ask why, since they were both based upon the same principles, it’s not based on Mike Austin’s (who was Dunaway’s mentor we all know), it’s because it looks like Mike Dunaway’s and not Mike Austin’s.

One more question that will come up, I’ll answer now – why isn’t it called the “Mike Dunaway Swing?”

What do I mean by “I may have the model?”

It means I’ve been going over the setup & mechanics for months, seeing what works best from the view of both (you can alter the stance & mechanics while keeping the essential model but I of course am looking for the optimal model).

It means that, were I to head to the driving range today, which unfortunately I can not, and may not for some time – I am confident that I replicate my favorite of Dunaway’s slightly differing swing moves:

The only problem and I do mean, the only problem, happens to be a rather large one and out of my control – with the Covid-19 pandemic in full swing, pardon the pun, I won’t be able to “test-drive” it until our local facilities open for the spring, if they open at all in the near or midterm.

I have been running several alternatives through my mind, because there is still much one can do with regards to swing mechanics without my actually hitting a ball myself.

I may also, instead of shooting a completely new “MCS Classic Golf Swing” video, take the 3 existing videos I made for that model:

… and edit an omnibus video from the essential parts of these videos.

I’ll take the next week or so to plot my course of action and then I’ll have a better vision of what the coming months will hold for WAX Nation.

Good to be back!  More to come.