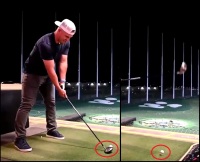 Now, Mike Trout is a professional baseball player and he hits a prodigious ball in his own sport, but come on, Modern Golf Swing proponents.

180 mph ball speed from a guy likely using a borrowed metal-wood (it wasn’t a driver), and in street shoes, while barely turning a hair?

Before I even begin, you notice it’s not even a driver he’s hitting, looks more like a 3-metal based on the size and profile of the club head as well as the height of the teed ball: 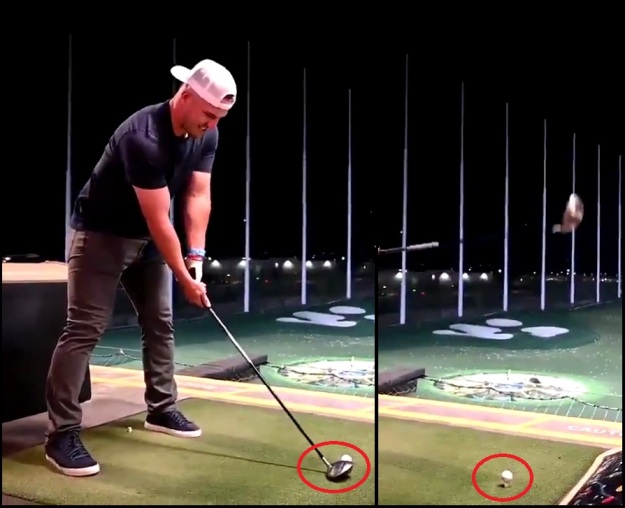 … and of course, if you’ve hit enough balls in your life, you can tell that’s not a driver impact sound.

Getting that out of the way, notice how an athlete who makes his living swinging at fastballs uses his body to produce 180 mph ball speed with a fairway metal – with a Classic Golf Swing pivot and hip/leg action.

Notice as well his relaxed, erect posture with no squatting in the legs.

And that number could only apply to ball speed, are we agreed?

So, this guy in his street clothes and shoes is generating at least 120 mph club speed with a 3 metal…

The man barely has any follow-through and it’s not his designated sport, so why are the best in the world at the game breaking their backs to produce the same ball speeds with custom-tailored drivers and balls.

Is it a perfect swing? Of course not, he’s not trained in that discipline, but I bet he gets a lot of rounds in during the off-season, because that’s a beaut of a motion.

If this guy actually switched sports – and I’m not talking about the skill aspects of the game such as course management, short game, etc – he’d blow away every golfer out there except perhaps Cameron Champ and/or Tony Finau when it comes to club and ball speed and distance.

And he’d likely look a lot like this, looking at his action above:

So, it’s a shame to see a guy who doesn’t play pro golf for a living having drinks and laughs with his buddies putting a more mechanically-correct action on a ball and producing speeds that 90% of those pro golfers would die for, and without any chance of hurting himself while doing it.