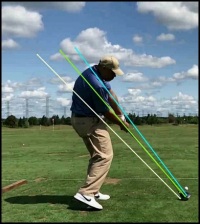 When I posted a while back on Mike Dunaway’s three different planes (address, at the top and impact), I had only just done an analysis of his swing down the line to notice it.

Well, you’ll recall that I said I’ve implemented as much of Austin/Dunaway principles into the MCS Golf Swing model as I could without actually making it the Austin/Dunaway model, and this is another thing you can add.

Witness an MCS model swing from August where I was working on my stance and pivot to make them even better, and you guessed it – the 3 planes in action:

I’ll go one better for you all, as you know that I struggled for years with a steep, over the top swing plane that I have since fixed by implementing the MCS Golf Swing principles.

How about hitting the address plane while going back, and then hitting the impact plane on the way back down?

Not with the proper setup and pivot action using MCS:

Lest anyone think that this is a contrived swing and not a free, un-manipulated one, here it is that particular swing in real time and slo-mo:

I have no reason to believe that anyone using the MCS Golf Swing model as designed and implementing it as such can’t hit the same “3 Planes Of Swing” as you see me doing.

It comes from building the fundamentally sound stance as described in the “E = MCS” video and eBook, then performing the mechanics of the “floating pivot” in the manner that Ben Hogan did, and how I describe it.

Nothing more, nothing less.

What I did to get from a merely MCS swing to closer and closer to the theoretical model with this season’s work, of course is in the upcoming “MCS – Synchronicity” video.