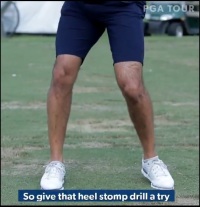 File this under the “Doing The Opposite Of Modern Golf Instruction Will Improve Your Performance” category, and if there wasn’t one before, there is now.

PGA Tour player Cameron Tringale, according to the PGA Tour, set an all-time mark in the stat “Year Over Year Speed Increase,” making a jump from 111.28 mph to 119.94 mph in one year.

That is an over 8.5 mph increase and you’ll never guess how he did it.  It wasn’t:

If you still haven’t guessed it, then you can see what it is below:

💪 @CamTringale is coming off the greatest jump in year-over-year club head speed in PGA TOUR history.

There are three things I love about what he’s saying here:

So, you see, Cam has set a record for year over year club speed increase by doing the exact opposite of the “Vertical Lift” and “Jump For Power” B.S. that is floating around

That, of course, increases his natural leverage by using more of the hips & legs, and thereby naturally would have increased his club speed just by that alone.

It seems that pros are themselves beginning to figure it out, as I don’t see or read Cam mention having got this from a coach or instructor (and if he did, he should)… and if every Modern Golf Swing pusher out there loses his job when enough people figure out that the MGS is junk science, I won’t shed a tear.

And for Seinfeld fans, Cam Tringale is the Opposite George Costanza of the Modern Golf Swing era.