You are all by now well acquainted with the pivot drills, especially the ones in the “E = MCS” swing video, and of course the Kettle Bell “One Exercise” from “EMCS2 – The Follow Up” video.

If there is one problem I’ve found in translating the pivot action from the drills to the golf swing, it’s that people can make a good pivot on the drill and then the brain goes haywire when they’re holding the end of a golf club.

In that regard, I’ve been working on a pivot drill that helps to both ingrain the feel of a whole-body pivot but also highlights the role of the arms in the pivot.

My favorite pivot drill of all time?  That would be the one I developed when I figured out Ben Hogan’s “Perfect Pivot” action and came up with this one to drill the hip and leg motion:

Following the drill instructions gave one the same pivot as Hogan: 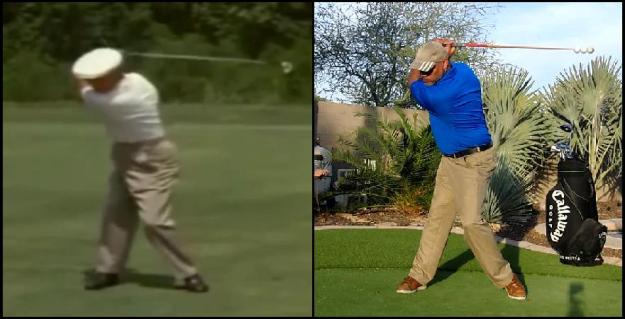 … and the simple “One Major Move” drill is still the one that best encapsulates the action of the body and right arm in the MCS Golf Swing motion, and although the gif. below isn’t from “E = MCS,” you can see that I had this visual of the swing as far back as 2014:

The drill I’m developing will also be variable, which means you’ll be able to do it both with a stable head on the entire pivot going back and coming down and through, as well as a more Dunaway-esque version where, for maximum leverage and speed production, you have a slight shift of the head to maximize the body’s leverage capacity:

Right now I have the following variable aspects of the same pivot action in the drill which can be broken down into:

That would be for one pivot type, with the stable head throughout, and then of course, you could take the exact same sequences to perform the pivot with the slight head shift and maximum leverage.

I can’t imagine you’d use the second type of pivot for anything other than really letting one fly off the tee when you have the confidence and practice under your belt to go for it, as well as perhaps a super-extra effort for, say, getting a shorter iron over an obstacle but wanting to advance it as far as you would with a longer, less lofted iron and no obstacle (getting over a tree and onto or near the green when you really need birdie or par).

I haven’t been to the range in four weeks, but the swings below are what my swing looked like at the time.

Reason (for the layoff) being, I’ve chosen to spend more time on modeling and drill-building because, believe it or not, I get better not hitting balls but thinking mechanics for a while then going to hit balls.

My posting frequency has dropped lately only because I have discussed every possible thing I can about the swing the way it is in the videos, and have been focused on taking that material and improving the methodology with better pivot/swinging drills and of course explaining/clarifying the mechanical action.

As I stated earlier in the week, I found out while going through all of this stuff that I still personally haven’t maxed out my mechanics potential, so I’m excited about what the future will bring.

These swings will be the ones with which I’ll compare the changes I’ve been working on during the time off.

I’m currently field-testing the pivot drill and should have some idea how well it works, and if it works as well or better than the other drills, you’ll all be the first to know about it, as well as the other stuff!