I had someone with whom I’m working on his swing ask me, when I told him that squatting in the setup will interfere with hip turn, that it seemed to him that this was what I was doing during the down swing.

It is not, I explained, as the position which appears to look like a squat is simply the transitioning from the top and the shifting of weight pressure to the leading foot.

It was a very good question, and here you can see it in a recent swing of mine: 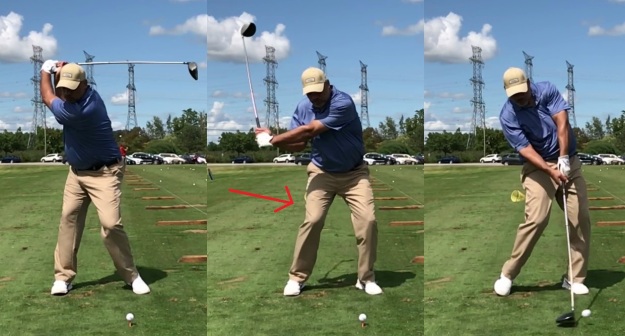 If you look at the actual swing motion from which the above stills were captured, you will see that it’s nothing more than catching the point where both legs are flexed, and not an actual squatting motion:

If someone on TV or in a magazine piece was given the still pic sequence from above, I’d bet you dollars to donuts that one or more of the phrases “driving the legs,” “using the ground,” “getting down to jump” or “dropping to explode up for vertical lift,” or any other similar terms would come into play.

They used to say the same “squatting into the down swing” terms to describe Sam Snead’s action, to the point you’ll hear this position called the “Snead Squat,” and how to do it, but the fact remains that it is a transitory point of a proper weight shift from the top of the back pivot into the down swing, and nothing more.

Not to mention, Sam Snead swung with a very mechanically-correct Classic Golf Swing action, and it’s no coincidence that if you swing in the MCS Golf Swing model, which is a Classic model, you will get the same thing in your down swing without having to do anything special or deliberate to do so.

Isn’t it funny how you are told to copy Snead’s “squat,” which happens naturally during his Classic swing action, but you’re not told to actually swing like Snead.  Which would entail a free hip and leg action and the subsequent leading heel lift:

Instead, you are given a bunch of Modern Golf Swing mumbo-jumbo on “internal hip rotation,” “vertical lift” and “squatting,” etc…

Don’t be fooled by people taking a very fast action (you cannot “squat to jump back up” in a down swing, it occurs too quickly – or at least your shouldn’t be trying to), and if you are deliberately doing this squatting to “jump” up at impact based on an instructor’s knowledge of mechanical action, I would suggest finding one who actually understands it.