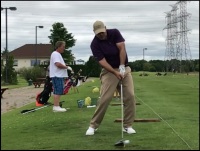 ** Major Correction Update: I referenced my club path impact going from out-to-in to just 1 degree off neutral. I wrote in the original posting that it was still out-to-in, which was a major typo, as I should have said it was now in-to-out.

The correction has been made in the Checks list of things I fixed.  /update

I have some steps of my golf swing journey I’d like to share below, with the last and crucial step I will be taking at the bottom of the posting.

I am very happy with the work I did on my swing this past week, and it’s actually the first time I’ve been out to hit balls twice in the same week for some time, so excited was I about the progress I was making.

You can go for years struggling with a part of your golf swing, we all know, and there’s no better feeling than when you make a breakthrough in something.

The very first breakthrough I made in my swing research was, of course, the determination around the summer of 2008 that the Modern Golf Swing is mechanically-unsound and shouldn’t be used by anyone unless physical issues necessitate making a short and compact swing with little power and speed and therefore lowered risk of injury.

The Classic Golf Swing, whichever method or model thereof you employ, is the way to swing a golf club and had been so for hundreds of years before the insane Modern method became de rigueur around the time I first took interest in golf in the mid-90s.

Once I figured that out, the rest of this journey has been the search for first, a proper golf swing model that was mechanically-correct, and finally to build the optimal golf swing model, which in essence means you can’t make it any more leveraged or efficient, and should give one maximum performance in the areas of power, accuracy and repeatability.

1. For yours truly, I struggled for years with an over-the-top club impact, so bad that it was the reason I walked away from the game before beginning my swing research.

2. Another issue was the problems I experienced setting up with a centered or even left-biased address, basically meaning standing over the ball with a vertical spine or even looking like I was leaning to the left at address.

3. If you want one more, there was my favoring the left arm in the setup so that it was extended, causing a bend in the right arm to take a proper grip, and this made me a little too forward-leaning in the setup compared to what is optimal.

4. Yet another problem was not getting “deep” enough in my pivot with the right side and arm, due to the fact I am left-handed swinging right and had the instinctive urge to yank the hands back high so that I could pull down from the top with the left arm.

So there you have four major issues that plagued me for a long time, and the first thing I fixed when I began this final MCS Golf Swing model was my setup bias, and let’s look at how things went:

– If you’re going to swing with a stable head and have a proper impact position, you want to swing with the right-bias, and I accomplished that change with the change to my model starting in late 2014.  Check 1 in the column.

– By sometime in 2015, I was getting my swing plane down from the over-the-top, but it took quite a bit of compensating and it was something I had to always watch lest it regressed, such is the nature of attempting swing changes by compensating or manipulating. I still suffered from the outside-in club path at impact even up to last year, even though my swing plane was getting to neutral, so that’s Check 1.5?

– Last summer, I had a breakthrough where, just swinging without trying to manipulate the path, I got my impact club path nearly neutral, less than 1 degree off perfectly down the line, but in the TXG Golf facility on the Foresight, that less-than-one-degree average was then actually in-to-out!**  A big, big Check 2 in the book!

– Two weeks ago, I really took notice of and began to hate that arm thing I was doing, and resolved to get rid of that once and for all.  This pas week, I got that done so that I had two straight arms the way the MCS model calls for in the setup, without the extension and with the arms hanging naturally, again the way the model calls for.  Check 3!

– Last, and by far not least, I managed to translate what I had been doing over the winter with regards to swinging with the right arm dominant. It took a few sessions once I got back out of doors, but I had to first diagnose and fix the arms problem, after which I was able to quickly (in less than a week) transition to the right-arm-only motion that I recorded on Friday.  Check 4!

You’ll notice that only one of the problems, the first one, resulted in an actual change to the MCS Golf Swing model I’d been working on since perhaps 2010 or so.

The rest of the problems would have been solved by simply adhering to the model I’ve built but, to be fair, I didn’t have the MCS model completed the way it is until the spring of 2017, when I changed the angled stance line requirement to an option, stating that standing perfectly square to the target line with all clubs was possible and actually fine.

You would see that, since then, a years-long model building process led me to make the final changes fairly quickly (a year for everything after Check 1.5) since I was done working on the model and could then focus on my own swing and its issues.

This would tell you a couple of things and prove something fairly major – I didn’t build the MCS Golf Swing for myself, but as a standard model of swinging after years of observing the greatest swingers in history and removing their idiosyncrasies – I told Fred Greene as much when he interviewed me for his “GolfSmarter” podcast back in May.

I also proved that, even with my scoliosis (curved and twisted spine) and the fact that I’m left-handed, it’s possible to adapt the standard model by following the principles, and that once I was sure I was done with the model (last summer), I came around to it within a year, over 9 months of which I didn’t even hit one ball (from late July last year to early May this year)!

In that regard, take away the over 9 months of not hitting balls and I got from Check 1.5 to hit 2 and all the way to 4 in about 2 months (early May to Friday).

This all brings us to my last step to be taken – now that I’ve finished my swing model, fixed my setup and finally the mechanical issues with the left arm and side, I have only to put it all together and swing fully with the entire body.

I did say yesterday that, even just trying to swing with the right arm only, I was still engaging the left side as I could tell from all the sore back muscles in the left side of my back.

However, that isn’t a full-body swing, and I can proceed to implementing that now that I’ve trained myself on how the right side should be moving and behaving in a right-dominant swing action.

So, there’s a difference between a right-only swing and a right-dominant swing that uses the entire body, and this is where I am right now. 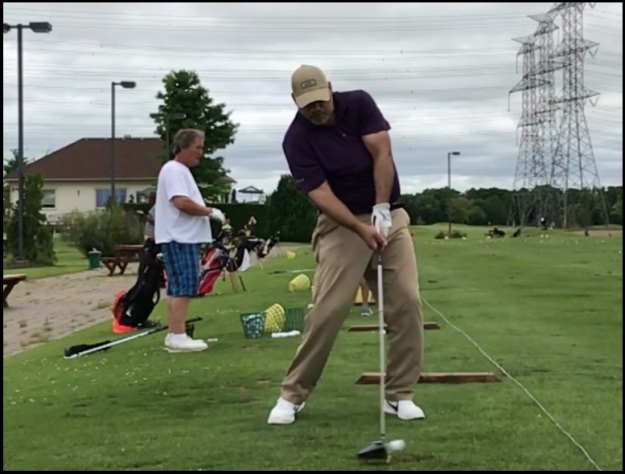 Thanks To WAX Nation For Sharing This Journey

I want to thank those of you who have been here for nearly the entire journey when my earlier blog began focusing on swing mechanics back at the end of 2009, as well as those who’ve joined the work in progress along the way, and those who were here but have drifted off for various reasons such as family, work, accomplishing their own swing goals or simply because the blog no longer holds their interest.

Everyone has been a valued member of WAX Nation and I am sensing another transition here, as I complete my own journey.

We are no longer in search of the optimal swing model, we have it, and now it’s time to make sure everyone who wants to can learn it, and to start focusing on performance and results with the swing model.

I may come to miss the days of excitement and discovery, but my own journey and the overcoming of every obstacle in my path have only served to prove that the model is the model and nothing in it needs to be changed.

Every breakthrough I’ve made has been in finding where I wasn’t following the model properly and, once I made the changes, I got closer to my best possible swing action.

So, perhaps even more exciting days of another sort lie ahead, but if you’re here now, I hope you’re going to stick around for them!

More, much more, to come.

11 thoughts on “Here Are All My Steps To MCS My Swing, With Only 1 Remaining (Updated)”