I’ve told you all about the challenges of swinging right-handed while being left-handed, the biggest one for me being the ability to swing with a right-dominant motion.

Today was an auspicious day for me, as I finally got a years-long flaw in my setup fixed this week, and right after that – bang – I was able to make right-dominant swings.

By that, I mean I completely ignored the left arm and side action and focused on just the “One Major Move” back swing from the standard MCS Golf Swing model and then performed the right arm “Pop & Drop” without pulling down with the left arm to start the transition.

The iron swings I posted on the 9th would be an example of that issue, even though I struck the ball well – I wanted to take it to the extreme and go full right-arm, which I accomplished today.

It was a true, “throwing release” swing action of the type that followers of Mikes Austin & Dunaway know well.

Of course, the left side was involved, helping to boost the right-arm action with with the leading side leverage, but it didn’t do what it usually did, which was to overpower the right side’s action and make it more of a “pulling” than a “pushing” or throwing action.

AND I nailed that Dunaway-esqe low trailing heel impact, and man, did I ever: 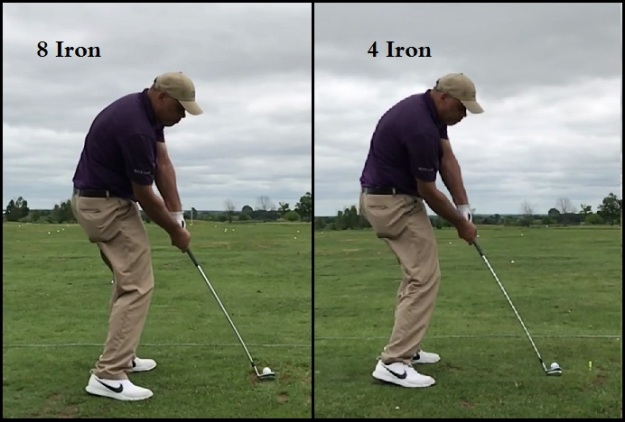 Remember that this isn’t something you should be deliberately trying to do – when I nailed the action today, my right foot was virtually flat at impact, but I wasn’t doing anything other than throwing those clubs down and through.

And I’ll tell you – I have never struck the ball with so much power yet so little effort.

I used my Mizuno MP-14 forged blades, the 8 and 4 irons, and not only did I hit them as far as I would have done with cavity-backs, I don’t remember ever sending an 8 iron that high and far!

This action of mine will only get better, as today was the first day I actually swung the way I was trying to with the right-dominant “throw” action.

I will post Driver video tomorrow and yes, friends – the summer and season are now officially underway,

And while I enjoy my new MCS Golf Swing that is now in sync with the optimal model, it is time to get into the nuts & bolts of everything I have been waiting to share using my own swing as an example (with others included of course).