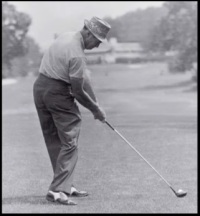 I sometimes struggle with finding ways to prove things about Mike Dunaway, because he never played competitive golf and his long drive days (of the sort that inspired Art Sellinger, founder of Long Drivers Of America) were long before the advent of YouTube.

Therefore, you don’t see a lot of “proof” of how powerful and long Dunaway was other than things like LDOA naming him the Father of Modern Long Drive and awarding him a lifetime achievement prize for his pioneering work.

So when I reference a part of proper swinging with Jack Nicklaus or Ben Hogan, even Byron Nelson, people get it and if what I’m showing proves my point, they tend to take it as more credible than someone whose name they don’t really run across much, like Dunaway’s.

However, I’m sure the name Sam Snead will ring a bell, and if it doesn’t, then I don’t know what to tell you, because Sam was one of the triumvirate of Ben Hogan, Byron Nelson and himself, all born in the same year and all greats of the game – he won more events than anyone in history and more majors than Nelson, in addition to being the oldest ever winner on the PGA Tour at 52.

Even more incredibly, he was self-taught, and that should tell you something when you see that his swing model was probably 90% of what MCS is.

So. when I say that the flat-trailing-foot impact shows maximum leveraging and use Mike Dunaway, you might grimace and say, “Eh, not too familiar with that guy…”

OK then, you can look at “Slammin’ Sam Snead,” (and why do people think he was nicknamed “Slammin'”???), who was the longest-hitting great golfer in his day, and probably only second to the long-bombing Jimmy Thomson, and Snead looked like this through the ball: 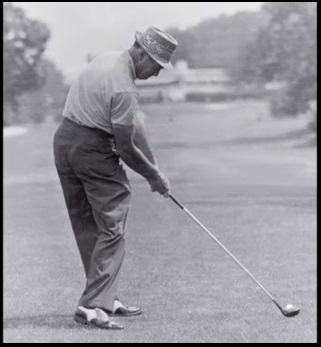 That trailing heel would actually be perfectly flat even with the driver impact but for the fact that Snead had an angled stance with the driver – the shoulders are square, and compare them to the foot-line, the angle causing the tiny heel lift. 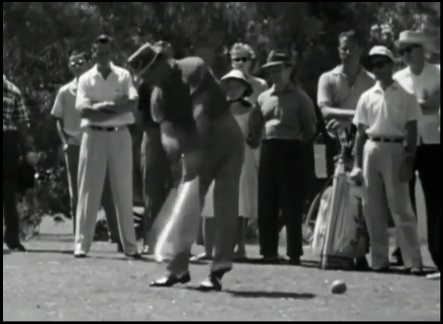 I’ve been looking at clips of Snead, and he indeed was not only the longest driver of the greats, he was a flat/low trailing heel at impact guy:

So, one of the longest-hitting players eve on Tour, with a self-taught swing, swung about exactly the way my research has told me you want to swing for leverage and power… had a flat-to-low impact heel, even with the Driver as he slammed that ball past everyone else…

It’s the optimal way to leverage the club down, folks – you can have a high impact trailing heel, that won’t make your swing mechanically-unsound or bad – it just isn’t the optimal way, and the optimal way beats every other way, because it’s optimal.