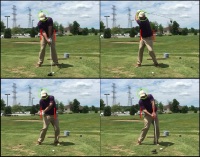 I was chatting with Jason today on his swing and we went over a couple of things to do with his setup.

I noticed that he was pushing his hands a little too far to the target at address, with a straightened leading wrist, and when I mentioned to him the way to fix this, we got into a discussion on the difference between impact and setup and why they are so.

So, most people (yours truly included) likely get into a habit of trying to set up at one point or another with their hands and wrists in the impact position, the logic being, if you’re going to be that way at impact, why not at address? 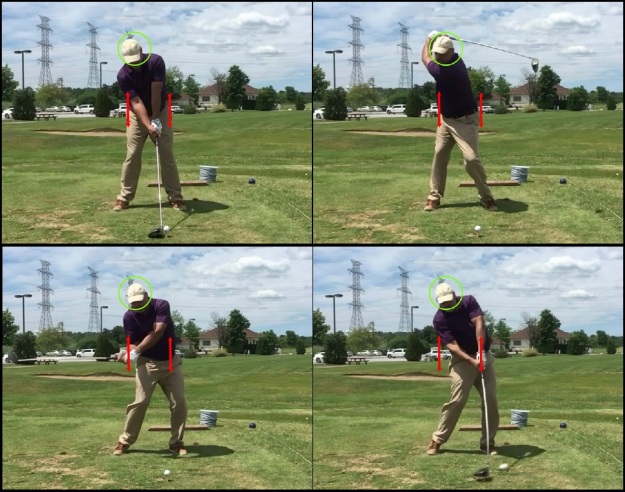 That logic certainly holds for the bias and spine-tilt, because you don’t want the head shifting or moving during the swing, if you want the most consistent results, in addition to it being the mechanically-optimal way of doing it.

With the leading wrist however, you don’t want the impact position at address because of the two main differences between address and impact.

As I’ve discussed previously in the “E = MCS” video the 1st video in the MCS Swing Video Series, and also touched on in the 3rd video, “MCS – The Kinetic Chain,” there are a couple of main differences that are caused by the shift of the weight into the leading foot from the transition.

Where you have the weight balanced more or less at address, you will have more weight or pressure into the leading foot at impact (remember the “Pressure Plates” concept that is a recurring theme here), which will cause both the hips to be more open, and the leading shoulder to be higher at impact than at address:

In the above gif., you’ll see the reason for the difference in leading wrist angle between address and impact.

If you need refreshing, this is in the “E = MCS” video regarding the setup and comparing address to impact, so this is nothing new!

Basically, if you set up with the leading arm and wrist already straight at address, then the higher leading shoulder will cause a change in the club head position – you will likely have been experiencing a lot of thin and topped shots doing this, because of course, if you lift a string, you raise the bottom end.

Look above at the swinging pendulum gif. – if you’re swinging that ball on a string and you raise the green fulcrum as the ball comes back down… what will happen to the ball itself and its level?

In that regard, the club head is the bottom of the string, so a straight leading arm and wrist form a string that will raise the club head when you raise the leading shoulder.

The cupped wrist is the way you’re putting “slack” into that string so that, when you raise the leading shoulder into impact, you take up that “slack” with the straightened wrist, without changing the elevation of the end of that string – the club head.

Not to mention, it’s much more difficult to take the club back on the pivot with the leading arm and wrist already at their maximum length.  You will have to change your level in order to not snag your club going back.

So, there’s the reason for the difference in leading wrist angle between address and impact!

4 thoughts on “Why The Cupped Leading Wrist At Address But Straight At Impact?”