I have taken two driver swings of mine, the first from back in 2011 when I was driving the ball as far as I do now, if not longer (there’s nothing like youth when you want to pound it), and one from this past summer.

For those who want to know why a proper swing plane is better than, say, an over-the-top plane, I can show you graphically why that is.

I’ve drawn a line through the shaft position at impact to indicate what a swing “plane” actually is (and if anyone says it’s different from that, then they don’t know what “plane” actually means), and you’ll see them both below: 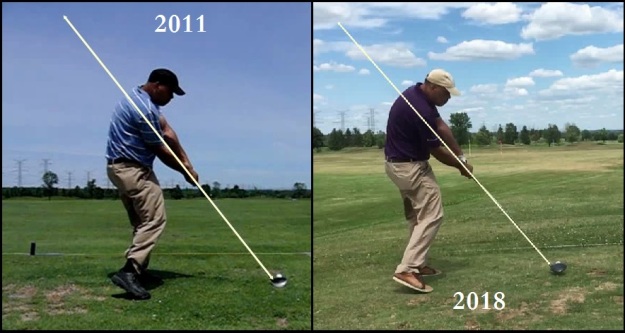 Now, let me show you something interesting with regards to swinging on-plane vs over the top.

Over-the-top means your hands and club are above that plane line for most of the down swing, and you’ll that in my 2011 swing, my hands never get to the plane line, staying above it until impact, when the hands drop below the line, which means I was pulling the club from outside to in at impact:

Now that’s not good, even though I probably hit this ball perfectly with my power fade (I don’t save bad shots on video except for a specific reason, and this wasn’t one), and the reason is that I would have had to time everything perfectly, since my hands are only on the plane for a split-second at impact.

Conversely, with my tighter swing from the summer, watch how amazingly long my hands are on the plane line before impact:

Amazingly, my hands are on that plane line from nearly the start of the down swing right through impact:

So, not only was I not over-the-top here above, I didn’t even have to “drop” anything “into the slot,” as my hands never leave that plane line once they touch it.

It’s better to “drop into the slot” than to be over the top, but I bet you’d all agree that being “in the slot” to begin with is far better than having to find it on the down swing with a big compensation move.

Now, this is something you can’t do purposefully, because of course, you’re looking at the ball and not at yourself from down the line, and you can’t manipulate the hands and club on a swing that reaches 120 mph impact speed to begin with.

But I’ll tell you what – when I said that my changes made my swing more consistent, you don’t get much more consistent in your swing path through impact than what I got on the Foresight GC Quad launch monitor around the time of that 2018 swing: 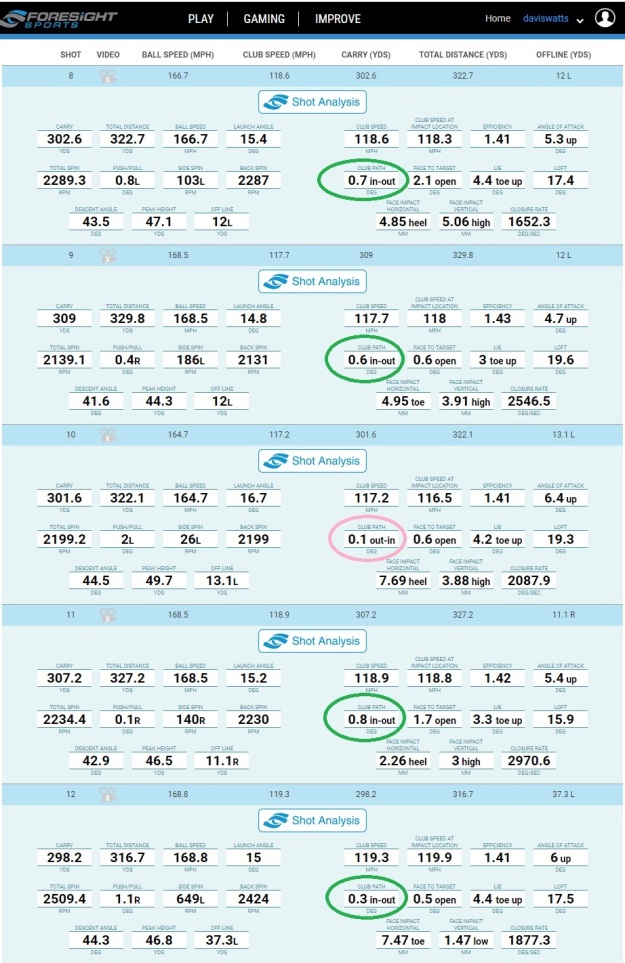 When you get a swing path like the above, nearly perfectly neutral, then you are going to hit the ball where you’re aiming, unless your alignment is off or you do something to prevent a square face at impact.

That’s why the proper address stance and the proper pivot mechanics are crucial – once you’re in motion, you’re basically going to make the swing you’re going to make, and although you may feel as though you can change something coming down, it’s more a post-impact reaction that you’re feeling when you try to adjust something pre-impact.

This is also why you will see a player make a very exaggerated move post-impact on TV when they make a bad swing, and guess what?  Nothing in that post-impact move does anything to save the shot, does it?

I have never deliberately tried to swing keeping my hands and the club on the plane line, because it’s something I just noticed today while looking at swing planes.

But what made it possible?  The newer, tighter back swing pivot and top position and the proper MCS stance, ball position, grip and mechanics!