Here’s an update on Blake Elliott that I’m delighted to share with WAX Golf readers who were following his exploits back in the summer 2016.

You’ll recall we spent a couple of weeks working on his swing in California then Texas after his freshman year at McNeese State. and how his talent and athleticism just blew me away.

So, yes, to those who emailed me asking “Is this the same Blake?” from back then, YUP, and he’s doing great:

I was delighted to see that he won his first NCAA Division 1 college event championship last week in Hawaii, earning him Southland Conference Golfer Of The Month into the bargain – and he’s currently ranked 81st in all of NCAA Division 1 golfers. 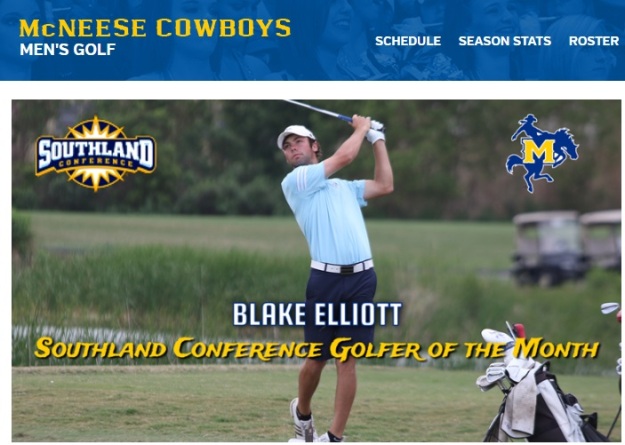 After a record-breaking performance in claiming the individual championship at the Warrior Princeville Makai Invitational, McNeese senior golfer Blake Elliott has been named the Southland Conference October Golfer of the Month, league officials announced on Wednesday.

His tournament-winning performance tied a McNeese and Louisiana record after he shot a 63 in the second round of the Warrior Princeville Makai Invitational and followed that up with a 67 for a 54-hole total of 198, a career-low.

He’s also shot up the World Amateur Rankings to 87th, but I have a feeling he’ll be climbing higher when the 2nd half of the college season resumes in February.

You’ll all remember how I was in awe of his talent when he shot 73 from the black tees at Torrey Pines South Course the first time he ever played it.

Congrats, Blake! Can’t believe it’s been 2 years already, but I knew when I saw what you could do in person that you were headed for big things.

So did his college coach Austin Burk, who had this to say after Blake’s maiden victory:

Blake Elliott kept his momentum going in Tuesday’s final round of the Warrior Princeville Makai Invitational after Monday’s record round, and because of that, he hoisted the individual champion trophy for the first time in his collegiate career.

The senior shot a 5-under par 67 on Tuesday to win the event with a three-round score of 198 and 18-under par, a career-low for 54 holes. The closest golfer to him was Louisville’s John Murphy who finished with a 15-under score.

“I’m very happy for Blake,” said head coach Austin Burk. “We all knew he was going to win at some point this year and I believe he will win a few more.”

Elliott led the field of 112 golfers and 20 teams with 20 birdies in the 54 holes played. He also recorded 29 pars and had an eagle, and what’s equally impressive, shot just four bogeys and only scored a couple of 5’s on his scorecards.

I remember Blake’s dad telling me back in April ’16 when we spoke in person at DKondo’s place (I had come down for the 2nd AZ WAX Golf Southwest Summit) that Blake, then in his freshman year, had the talent to go big time – having seen him swing and play in person – he wasn’t blowing smoke, and this is awesome.

He’s got huge power, he’s got great iron work, and a short game to go with it all.