I wrote about Francesco Molinari’s great Classic Golf Swing model when he won the Quicken Loans last summer and then in the same month, the Open Championship, and while I’ve never heard anything he has to say about the swing…

… I was forwarded an article that confirms exactly what I’ve said about his amazing ball-striking & increase in distance by going back to the Classic Swing and leaving the Modern Golf Swing in the dumpster (or dustbin, if you will), where it belongs.

Thanks to WAX Golf reader Bill Swan for forwarding me this piece from Golf.com (by Luke Kerr-Dineen) wherein Molinari nails exactly what gave him such a dramatic increase in driving distance (from 278 in 2013 to 301 average per drive in 2018) – it was changing to the Classic Golf Swing setup and pivot.

First the flaring of the leading foot:

First, at address, he flared his left foot out towards the target. Many golfers are taught to keep their toes turned-in more so their toes are pointed perpendicular to the target line.

But by turning his left foot out more, Molinari said it created more speed by freeing-up his hips and allowing them to move more freely through the ball.

Of course, I’ve been talking about having the flared leading foot (both, really, but more-so in the leading foot) since I first began blogging about the golf swing setup.

It’s a part of the MCS setup that has never changed.

You can see it in the diagram I created for the “E = MCS” swing video of last summer, in the latest MCS Golf Swing video series: 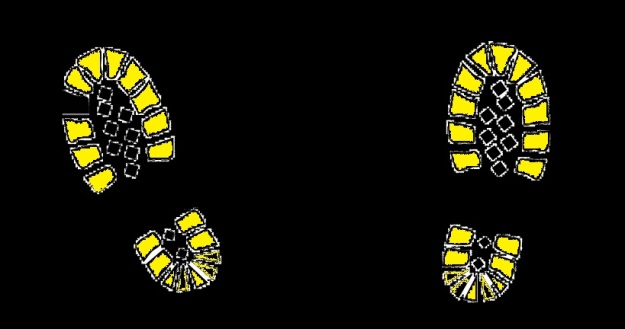 I always point out the flaw whenever I see a swinger setting up with squared feet at address, and this likely came about as a compensation in the setup when golfers began to keep their leading foot planted with the advent of the Modern Golf Swing model.

You can’t get as much hip turn with the leading heel planted, which is the idea of twisting the lower back against the restricted hips on the back pivot.

Of course, this problem is only because swingers keep their leading heel firmly planted, so Molinari gives the second key to his increased power and distance, which will surprise exactly no one who’s following this blog for any length of time:

The other thing he did… He lifts the left heel on his backswing.

Molinari’s lack of flexibility means he struggles to make a full turn with both his upper and lower bodies on the backswing; lifting his left heel slightly lets him turn more freely going back, and creates more power because of it.

And let me tell you all something right now – you don’t need flexibility to swing a golf club, because there should be very little if any twisting of the lower back with a proper pivot.

That’s because the hips & legs provide the turning, not any twisting of the lower back (there is some degree of spinal rotation in the thoracic region of the back, but almost everyone has the requisite flexibility in that area), so a lack of flexibility should mean nothing if you set up and swing properly.

I proved it when I hurt my back a couple of days before flying to Phoenix, AZ, back in March of 2016 to meet up with DKondo and the WAX Southwest Chapter – I could barely bend over to tee up the ball, or even tie my shoes, I was in so much pain – but it had no effect whatsoever on my golf swing, as I was smashing 300+ yard drives all the time I was down there:

DJ Swinging With A Bad Back…

I was very uncomfortable sitting in the plane for the 5-hour flight to Phoenix, I was groaning with pain and stiffness just teeing up a ball, but as you can see – no problem swinging a driver!

So, take it from the Open Champion who averaged over 300 yards this past season standing 5′ 8″ tall – technique matters!

2 thoughts on “Francesco Molinari Does It Again – MCS Principles!”