I keep harping on how position is the key to performing a mechanically-sound golf swing without compensations or manipulations.

If you think about it, the ball is not in motion, and if you are swinging from a fixed point on the ground, then there is really only position from which you can swing to make pure contact without having to engage some or a lot of hand-eye coordination and lateral/vertical motion.

Just think of the Iron Byron, as a matter of fact – you know what the motion is that the I.B. is going to perform, so take that out of the equation and what are you left with other than the position of the Iron Byron in relation to the ball?

That’s all that’s left if you don’t position the machine properly with relation to the ball, then it won’t be able to create the ball flight your desire, providing it even makes contact with the ball!

So when you have a swing model giving you the proper mechanics in order to perform a repeatable swing motion, then you usually only have the position to look at when you make a bad swing, unless you know right away that you made an actual bad motion.

Pretty simple – and that’s why the G.O.A.T. in terms of major wins and in runner-up finishes has a very familiar-looking setup: 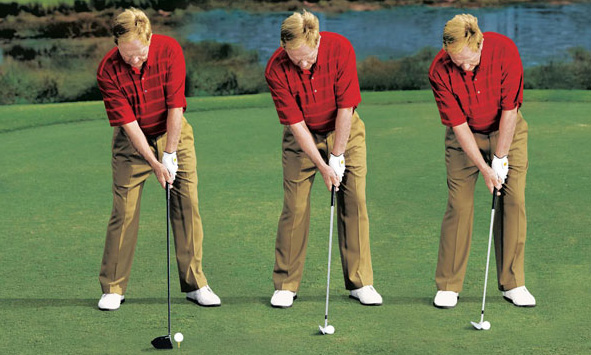 You’ll notice the exact same things Jack did in setting up to the ball as the MCS Golf Swing model calls for, right down to his hands – where are the hands supposed to be in the MCS setup, and where are his?

So, it’s more than just the basic guidelines of having, say, the right-biased spine, which is a good start – there are other factors in play when setting up to the ball such as where you position your ball with the different clubs (again, look at the ball positions and compare with the MCS positions).

There’s also the down the line stance and posture, which again the greatest swingers of the Classic Golf Swing era have much more in common than different:

The more “standard” you can make your stance and mechanics, meaning you have the same setup and motion for all clubs, the easier it is to make repeatable swings and play golf.

And the next time you’re tempted to say, “Well, the mechanics are one thing, but position and stance aren’t that important,” ask yourself how well the Iron Byron would hit balls if you didn’t care what the positioning was when setting it up to swing.

If your response is to say, “Well duh, of course you have to set the machine up properly to the ball to get it hit proper shots,” ask yourself if you’re better than a machine if you’re not taking your setup seriously!