I actually completed Part 1 of the “MCS – The Kinetic Chain” video on Thursday and sent it out to all of those on the waiting list – if you haven’t been checking your email and you pre-ordered, the download link is waiting for you!

I wasn’t expecting any feedback until everyone had viewed the entire video, but I have received a couple of emails that have me smiling, because this video was hugely delayed.

First by a very late spring, then by continuing work on the concepts, and finally by a computer blow-up that forced me to re-start the final edit two weeks ago.

The first email was a thumbs-up on the Part 1 that S.M. sent within an hour or two of my sending out the links, and full marks for brevity:

That was from a WAX Nation member, P.A., who has been watching MCS videos since my very first one in 2010, and the next is from another long-time WAX Golf reader, going back at least to 2013, if not before:

So far, a brilliant summation of your mechanics and swing. Without a doubt, the element most misunderstood is the set up. The Leaning “A frame” simply makes the balance of the swing almost automatic! Wouldn’t you LOVE to see a tour pro adopt this set up and then swing?

‘Tis a thing of beauty DJ.

Thanks to both of them for giving me a little boost as I motor through Pt 2, which I wanted to have completed by today but which will take a little longer due to family events through the weekend.

There is really only another long day or a couple of moderate days left to complete it, however I’m glad I decided to get Pt 1 out to everyone for this reason.

On another note, I was looking at Maurice Allen’s impact position from his Volvik World Long Drive Championship victory earlier in the week, and something about it just kept nudging at me… I’ve seen nearly that identical impact position before.

So, I did some digging through my photo archives, and yep – see if you all remember this impact pic from 2013, the summer of the New MCS model remake: 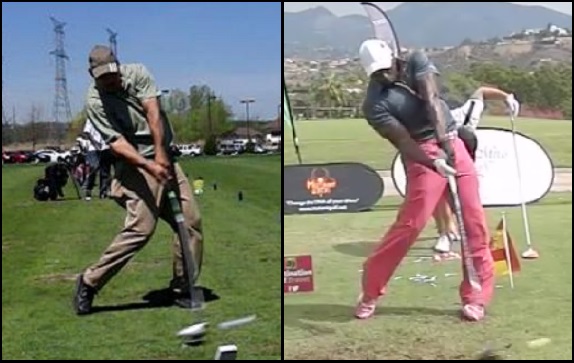 The only difference I can see, really, aside from the fact that M. Allen would drive the ball miles past me, is in the leading foot angles at impact.

That was the first year after I’d left the Mike Austin swing camp and begun to build my own model from scratch, and I remember that I was launching that ball that spring.

Of course, I eventually began to model a swing action that was more conducive to playing golf rather than just swinging for the fences, but I had a bunch of drives that year with at least 8 seconds of hang time.

Comparing my impact position to Allen’s, I’m not surprised, even if I was 43 at the time!

And the point I’m making is that the more mechanically-sound or MCS, if you will, a swing motion is, the more similarities than differences shall you find when comparing two separate swingers.

Man, I miss that driver – but sadly… cracked…

So, I’ll be waiting to see, with everyone else, if there is actually a final round of the BMW or if it gets rained out and becomes a 54 hole soaker.

As far as the event itself goes, you see the proof this week that you can’t pick and choose things in a golfer’s game or performance from round to round to predict anything happening.

Case in point: Every event this year, it seems, Tiger Woods got off to slow starts and back-doored his way into pretty good finishes on the weekend.

I kept reading things along the lines of, “if only TW could get a decent first round in, he’d win going away…” to which I would shake my head.

First, it’s a lot easier to shoot 65 on a Saturday or Sunday while out of reasonable contention, because there’s no pressure. Not compared to being out in front or just off the lead.

And so what happened this week?

TW came out shooting the lights out to lead with Rory after Rd 1, and everyone was waiting for the runaway win.

However, after a very ordinary 70 in the 2nd round and then a 66 today, TW sits 5 strokes back of the leader at T11… which goes to show that having a great first round does not guarantee anything other than having had a great first round!

A great Sunday to all, and Pt 2 is nearly ready, WAX Nation!

4 thoughts on “The More MCS (Mechanically-Correct), The More Similarities”