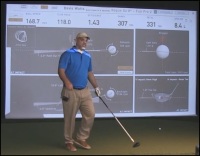 While working on the “MCS – Project 2018” video, I finally seized upon a theme, as most of my videos are usually centered around a theme of sorts, like the pivot (“MCS – Perfect Pivot), or leverage (“MCS – Ultimate Leverage”), or the “One Major Move” from the “E = MCS” video.

The original intent of this video was to provide proof of the efficiency and effectiveness of using the MCS Golf Swing model, by explaining with numbers and graphics how and why it is such.

However I wanted to incorporate as well the detailed explanation of why the “One Major Move” is so simple and yet gives you so much in the swing.

Everything I’ve talked about since last summer, with regards to Levers and leverage, and how to create power by “stepping into it,” and even how the proper top position with regards to hands and arms create the optimal down swing plane – these are all part of the “kinetic chain.”

This term is a pretty old one in terms of modern sports motion, considering it was coined all the way back in 1875 by Franz Reuleaux and then adapted in 1995 by Dr. Arthur Steindler:

In 1995, Dr. Arthur Steindler adapted Reuleaux’s theory and included the analysis of human movement, sport-specific activity patterns and exercise. He suggested that the extremities should rather be thought of as rigid, overlapping segments in series and he defined the kinetic chain as a “combination of several successively arranged joints constituting a complex motor unit.”

Without getting too far into the weeds, the simple concept could be made of this “kinetic chain” by simply looking at how everything from the address to impact and the finish is a series of connected motions, and the simpler you can make it all, the better you will swing.

The Modern Golf Swing industry does nothing with the idea of a kinetic chain, of course – it relies on unnatural motions or actions such as snapping feet and legs, twisting the lower body against resisting hips, and right there with the torso vs resisting hips, you break the proper kinetic chain.

You would never swing a baseball bat in the modern golf swing way, because you’d break yourself in half trying for more than a swing or two. The same goes with an axe, or with throwing something.

Why people think it’s OK to swing in the modern method, is beyond me, but I can prove pretty easily with my own experience that the Classic Golf Swing and especially an optimal model of the Classic swing is the way to swing, because it all follows a proper kinetic chain.

I can take a week off swinging and still swing fast enough to drive the ball well over 300 yards:

…  and not hurt myself, and I can swing a Momentus Heavy Driver and produce nearly the average ball speed of a PGA Tour pro, without hurting myself, because I use a kinetic chain of motion:

… then you’re not doing it in the optimal manner, and if you don’t care about doing it that way, then I don’t know why you would ever complain about your swing or the injuries you incur.

So, while I wait patiently for the Modern Golf Swing method to go away, I can still help people who want to swing properly, with power and accuracy and without risking preventable injury through improper motion.

I began the final series on the MCS Golf Swing, which was entitled “E = MCS,” followed by the “EMCS – The Follow-Up” video, and the final offering in this series will be “MCS – The Kinetic Chain,” because “Project 2018” was just a working title, if you’ll recall.

The work continues, and I’m excited about what I’m going to be able to give you all, now that we’re in the final stages!

Enjoy Moving Day in the WGC Bridgestone Invitational, and I’ll see you all in a bit.

Need A Swing That Is More Easily Maintained?Angle of Attack,