Jason posted an excellent comment & query in the previous posting, where he made the connection to the things I’ve been changing in my own MCS Golf Swing to closer match the theoretical model.

He talked about Ben Hogan’s thoughts on the wrist action in the back swing affecting shot-shaping, and although I’ve been focused on Hogan’s pivot action, I found this interesting.

… I believe Hogan mentioned this in that Life Magazine article. He said he didn’t consciously cup his wrists as much when he wanted to produce a draw action.

The funny thing is, I was discussing this very thing with David D at the range yesterday while working on my own top position and club shaft angle, and the reasoning is very simple:

You can have a “flying elbow” and still be mechanically-sound in your swing, as well as being across the line with the club shaft.

You’re not going to risk injury simply by having a “flying elbow” or being “across the line” in your golf swing, and one thing doesn’t cause the other, as Jack Nicklaus had a pretty standard shaft position at the top even with the flying elbow.

The greatest major winner of all time, Mr. Jack Nicklaus, had a “flying elbow” and still won 18 majors and over 70 Tour events: 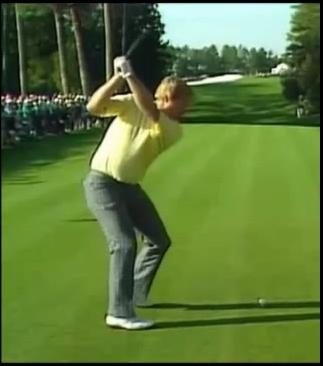 Bobby Jones, considered to be the greatest amateur golfers of all time and one of the greatest ever, pro or amateur, had a very “across the line” shaft position at the top:

Neither elbow position nor shaft angle are fatal, they’re simply something that could be not optimal, meaning if you changed either, you might have greater consistency in your ball-striking, which is why I decided to make changes.

I have always been a fade hitter, as was Nicklaus with his “flying elbow,” and for me, it was both the elbow position and the wrist cock: 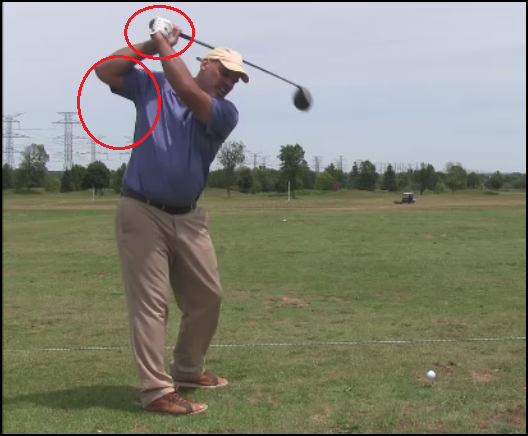 By lowering my right elbow or making it “tighter” to the body and by flattening my left wrist, I can change the above shaft position to the one below, and by a pretty big degree:

The point here is that having a mechanically-correct or sound swing isn’t going to make it perfect.

Having a flatter plane makes it easier to hit draws, and the poster-child is obviously Ben Hogan, who fought a hook much of his career:

Hogan kept the flat plane even when he began playing a fade as you can see above, but he accomplished that, as Jason mentions above, by changing his wrist position at the top to a flatter one,

And of course Nicklaus played a fade with his “flying elbow,” but wasn’t across the line because of his wrist position at the top.

Making your swing mechanically-sound means swinging in a manner that the body is designed to move, but if you follow the logic that the shoulders and wrists have a wide range of motion, you can have big differences in swings that are still mechanically-sound.

The big no-no in the Modern Golf Swing is the restricting of the hip action and legs on the back pivot and twisting the lower back, which is not the way the body naturally moves to swing an object.

But things like the elbow position and wrist angles – both are variable actions and so, while you won’t necessarily be risking injury doing it one way over another, you will have positions that are optimal versus not, and that means you can always improve a mechanically-correct swing!

6 thoughts on “Flat Planes vs Steep Planes & “Flying Elbows,” “Across The Line””