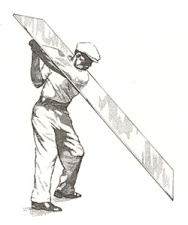 Sometimes it’s a very old concept that you’ve never really “gotten” that becomes a new one when it clicks for you.

I was swinging yesterday at home with my SwingRite and for some reason, a thought popped into my head while working on the new top position for my back pivot.

I was making back swings with the right elbow tight to the body, Ben-Hogan-style, and I thought, “Hmm, it would make this move much easier if I changed my visual angle on the back swing from a vertical one to an angled one…”

And right there, I solved my issue of the steep back swing plane forever, because that thought involved taking the club back with a “flat wrist” feel to the left arm.

Now, this is visual concept and a “feel,” whether the wrist is flat or not, and it then occurred to me that it was just my visual changing from the vertical concept that I’ve always had (even though I talk about the swing being a tilted Ferris Wheel) to the Ben Hogan concept of a pane of glass that you don’t want to break when going back! 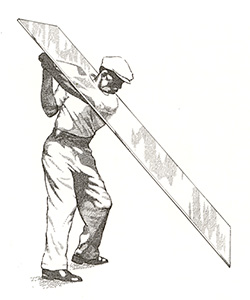 I’ve known about this concept forever, but it never really registered for me, which is why I have always been so steep on my back swing plane, but I guess it’s better late than never. 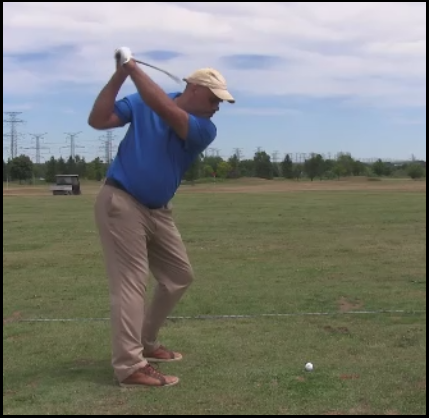 So, I went to hit balls today to try it out and… well, I’ll let you just see for yourselves in a couple of gifs how it went.

I should perhaps feel chagrined that I never clicked on this concept before, but I’ve always been a steep-plane and long back swing kind of guy who, even when I tried this concept years and years ago, was still very steep going back.

It just took my coming around to it now that the only thing in my swing with which I was dissatisfied was the overly long back swing.

But to be honest, it’s likely just as “long,” just on a different plane, but that makes all the difference in the world.

It certainly felt different and I’m already feeling it in my shoulder and upper back muscles, due to the different action from what my body is accustomed to, but I definitely like it, because you really have to get that right hip back behind you (straight right leg) to make it work properly.

So two things I’ve never done quite according to the theoretical model (steeper plane than required and a flexed right knee at the top), I have solved with the change to the Hogan plane visual, and that suits me just fine!

I’ll edit the video from today to post on the weekend – it looks like rain through Sunday night, so I will likely not be hitting balls again before Monday or Tuesday.

Next on the menu are the slo-mo video shoot with a high-speed camera and, while I work on finishing the “MCS – Project 2018” video, perhaps another number session at TXG Golf.