It’s easy when you’re in the proper position to do so.  It is much easier than spending endless time on the range trying to groove a new manipulation to your swing.

In fact, I’m of the opinion that no one ever really changes their swing when they do it right – they change something in their setup and swing the same way.

Take a look at the below pics for example: 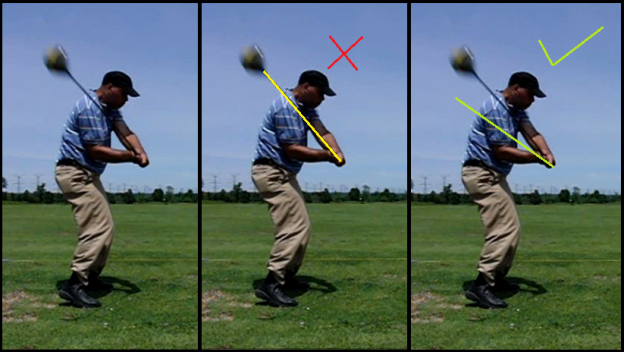 You see my club shaft in the swing is on the same line as my left arm coming down, because I am a lefty swinging right, and I control the club more with my left arm than my right.

But of course, that is a very steep plane when you compare it to what a “neutral” plane would be, between the two forearms – anything that gets too far from that on either side, steep or flat, will get you into trouble and make your misses harder to play, and consistency a lot harder to maintain on the whole.

That neutral position is the “slot” you hear people refer to as in “dropping the club into the slot” on the down swing.

Now, I have shown that I could swing with a flatter or more neutral swing plane as I did last year when I was modeling the MCS Golf Swing in the “E = MCS” video:

That’s from an actual swing that you’ve seen in the video, and the only problem is that, while I was performing the action, it was done with a conscious effort, and that’s why most golfers have to spend loads of time on the range to groove their actions.

They are swinging with conscious manipulation, and when their focus lapses for even second, or when they’re under pressure and the nerves begin to affect the muscle motors, you get the “What was that?!?” type of misses that can ruin a great or good round.

And then to compound it, sometimes you lose your “feel” for the manipulation after a couple of bad shots or under pressure or even when you’re having an off day, and everything falls apart til you can get to the range to figure it out.

Sound familiar? Of course it does – you see that happening on TV every week when there’s a Tour event on.

So, why not fix your issues by fixing the source of the problem?

My issue was not that my swing motion was causing a steep plane – it was that my setup before I swung was leading to that steep plane as I swung naturally and freely.

So I fixed my setup on Thursday, using the same MCS Golf Swing setup procedure I’ve given everyone in “E = MCS,” and voila:

One might think I was doing this consciously, but I wasn’t – I was swinging in the same manner as in the swing you see from 2011, but it was from a better setup position.

From that better position, I just pivot back and let it rip.

And there, you see the improved “Drop” I’m getting in my “Drop & Pop” down swing sequence.

I’m not done, either – that was the first day hitting balls with the improved setup, and when my visual image catches up to the motion, it’ll get even better.

You’ll remember that I was averaging around 170 mph ball speed and 324 yards per drive at the TXG Golf facility a couple of weeks ago – that was as fast as I could swing under control for playing purposes, playing that power fade.

That’s because, as I’ve said – no swing is perfect, but the closer you get to the optimal model, the better your swing will be.

And it all begins with the setup.

It makes all the difference in the world!