I have been working on my MCS Golf Swing model since the season began again, and the first half-dozen sessions I’ve had were just to try to tune my swing to the optimal model’s stance and mechanics.

I did get into the 180’s in ball speed mph last summer once I was into the swing of things, but of course that’s after a few weeks of work, so I knew I wouldn’t be that high yet just getting into the season.

Today I went to just hit balls and see where my speed was with regards to the driver.  It would seems I’m probably in the 170’s in ball speed mph according to the SSR device (and yes, the SSR can be off with club head speed because the toe of the club may be moving faster than the sweet spot when turning over, but the ball speed is the ball speed as measured by Doppler radar and so should be pretty accurate).

I did hit 180 mph ball speed 4 or 5 times today but the average would be in the 170’s, and that’s why I am going to try to get in a testing facility analysis to get some solid numbers on distance and speed.

What I did notice was that I still have work to do with my optimal swing setup, as you want it as tight as possible for the maximum leverage – when I did that (set up tight as possible to the ball), was when my ball speed with the driver went into the high 170s up to 180 mph.

The numbers I’m most interested in aren’t the speed and distance, as I have a good idea anyways after 13 years of swing research how far I’m hitting any club with laser measured targets and greens – what I want to see is the Attack Angle and spin rates, because I was for years a negative AoA ball driver and now I know it’s positive.

It couldn’t be negative from the launch angle I’m seeing on video and the carry distances while flying so high. 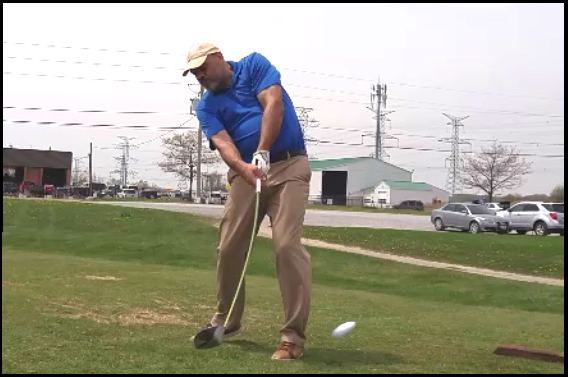 As we all know, a high launch angle with low spin with the driver will give you the best results as far as carry and roll, because when the ball goes high due to tons of back spin from a high lofted driver, it will balloon and drop out of the sky.

When you get a high launch and low spin, that’s when the ball just seems to carry forever, and still gets run-out upon landing.

I’m also interested to see what my launch numbers are for the irons, because I’ve been hitting some crazy-high irons that also seem to just go and go before coming down very softly, which is really what you want unless you you’re going to hit knock-downs for low trajectory and extra run.

I have a charity tournament coming up on the 28th as well to which I’ve been invited, so when I talked about getting some on-the-course footage for the upcoming “Project 2018” video, that is also coming along.

4 thoughts on “Getting Some Speed Back (170s MPH Ball Speed)”