Several people who read WAX Golf have noticed that Wells Fargo champion Jason Day is now employing a “stealth heel lift” on some of his driver swings, and I got one angle that shows it clearly on a drive he hit yesterday.

From not being able to play regularly the past two seasons since hitting the Number 1 World Rankings, he has now won two events this season.

I’m wondering if his new-found discovery of the heel lift will be able to save his back, which seemed likely to take him out of golf by the age of 30 just a couple of years ago.

It isn’t much, but I’ve said time and time again that it’s not the degree of heel lift that will matter, but rather that one is freeing up the hips to turn more naturally, and J-Day appears to have at least done that (freeing up the hips more).

Before, he was so frozen in the lower body on the back swing, and his change of direction to start the down swing was so violent, that half the time he was playing (when he was fit enough to do so), you saw this: 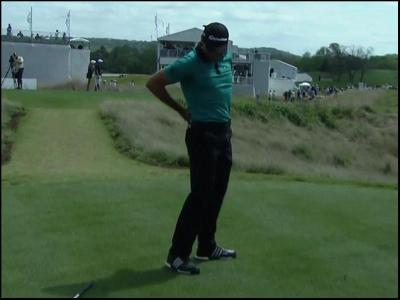 Now that he’s freeing up the lower body, even if just a bit, he’s able to employ that “left foot stomp” move from the top to really get into that left foot and hip coming down and just pulverize that ball – but now, without having to grab his lower back all the time!

I would still like to see freedom in the hips, but for a player who just a couple of seasons ago looked like he wasn’t going to be around much longer before something snapped – it’s a definite improvement!

And perhaps, when he gets used to more movement in the lower body on the back swing pivot, he’ll free them up even more.

And that would be bad news for the rest of the Tour, because a healthy Jason Day, while he may put you to sleep with his pre-shot routine (they don’t call him “All Day” for nothing), he may snag more events and majors that he otherwise wouldn’t have.

The tide is turning, my friends.

It is only a matter of time before the Modern Golf Swing principles are abandoned as former adherents find relief in their backs and more years in their playing careers by swinging in a more mechanically-correct manner.

And when the majority of the world’s best players are swinging with free hips and a lifting front heel – the rest of the world will follow.

For now, I gotta do this: