(Updated At Bottom With Swing Analysis)

This is likely the best shot Rory McIlroy will have to complete his Grand Slam quest in some time, because how many times will he be 1 shot back of the lead through 2 holes of the Final Round of the Masters?

Not saying he won’t get it done if he falls short today, but you only get so many chances and he’s in prime position to do it.

As I write, Rory has come off bogey to come within 1 of Patrick Reed, but Jon Rahm lurks 3 off the lead at -10, so I’m thinking one of those 3 players will be the Masters Champion of 2018 come the end of the day. 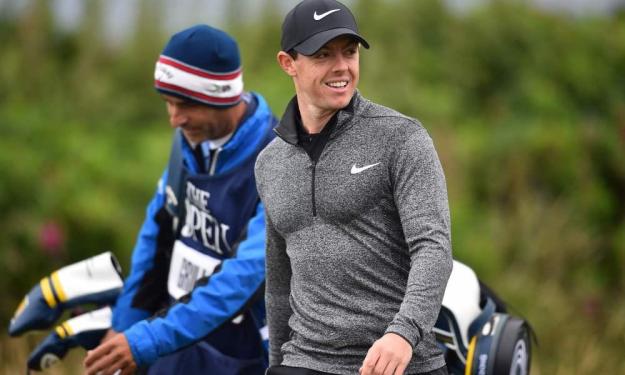 My money is on Rory as the only major winner in the last 2 groups, so unless Reed can tame the nerves (bogey on 1, par on the par 5 second), I give it to experience. **

Nonetheless, a hot round from one of the chasers might put the pressure on, so we’ll have to see.

Open Thread, and I’m going back to the coverage.  A good Sunday to you all.

** Update: And just as I post this, Reed birdies 3 and Rory bogeys, so it’s back to a 3 stroke lead for Reed!

Here’s the update on yesterday’s action with a look at P.R.’s swing:

Aaaaand…that’s why they play the 18 holes to determine the winner.

Rory McIlroy was 3 strokes behind at the start, yes, but was within 1 stroke after 2 holes, and just couldn’t bring it home.

That’s not the first time the Masters final day pressure got to him. Perhaps he’ll get another chance for the career slam!

Rickie Fowler with a great 67 and massive birdie putt on 18 to come close. Didn’t crack.

Reed did just enough to win it, but he’s wearing the Green Jacket now, and that’s all that matters when the sun is setting.

It’s definitely not the worst swing in the world.

Pretty good setup with the right-bias – you’ll notice the very stable head, which creates the “floating pivot” and by that, a stable head through the entire swing, not a “floating heel,” which are two different things.:

A great “floating pivot” and that’s because of his great setup.  A stable head gives you great leverage when you come down and through like he does:

This swing move takes timing, and timing swings can suffer under pressure, as you saw with some loose shots yesterday when the heat was on.

But he held it together enough to get across the finish line and having survived that, he’ll likely keep winning, and perhaps at a faster clip, but he’s already won 6 events, one of them the Masters, at 27.

So, he’s got that little leading foot release on the back swing pivot, which means that if he implemented a trailing foot release instead of the flying foot, I would have absolutely nothing negative to say about his swing at all.