I will admit that Phil Mickelson has distressed me from time to time – I use him as an example of a Classic Golf Swinger in the Modern Golf Swing era.

And yet he constantly tinkers, sometimes going to a planted-heel swing (and winning nothing, I might add).

Vijay Singh has done this as well in recent years and of course, he hasn’t won anything since his Classic Golf Swing days, but he, along with Bubba Watson and Mickelson, are shining examples of how to win tournaments and majors swinging with mechanically-sound golf swing models.

And we’re not talking about journeymen!  Bubba Watson is the least accomplished of these three Classic swingers – with 2 Masters wins and 10 total Tour wins…not too shabby, is it?

What connects the above 3 players?

They swing in the Classic Golf Swing style of course, with free and full hip rotation on the back swing and lifting leading heel.

And it’s no coincidence that the hallmark of these three winners is that they are winning or won (Vijay is now on the Champions Tour) on the PGA Tour at ages that you don’t see much anymore, due to the fact that players’ prime years are being cut short by injuries and limitations that the Modern Golf Swing brings to other players.

The limitation, of course, is that you can’t keep twisting your back and torso forever, so you see many great players dropping off in their late 20’s and early 30’s now.

But Phil Mickelson is in another class, with 5 major victories (one during the year he turned 40 and another at 43) and 43 PGA Tour wins, the latest of which he just snagged, a WGC victory in Mexico at the ripe old age of 47 (he’ll be 48 this year).

He has actually said (before he tried otherwise) that his Classic Golf Swing method was the key to his longevity and that the Modern Golf Swing belonged in a back-brace – his words, not mine!

“You can play golf for a lifetime and injury-free if you swing the club like Bobby Jones did, like Ernest Jones used to teach — where it’s a swinging motion rather than a violent movement,” Mickelson said from Augusta.

“A lot of the young guys get hurt as they create this violent, connected movement, and I don’t believe that’s the proper way to swing the golf club.”

Mickelson said his freer move… is why he’s been able to play relatively injury-free into his mid-40s, and he worries about a generation of young players copying the aggressive lashes they see on tour telecasts.

He was experimenting with a planted-heel swing the last I saw of him, and it was no surprise that he hadn’t won anything since 2013.

When I heard of his win yesterday however, I went this morning to check the highlight reels and of course, Phil has returned to the free and full hip turn with the Classic Swing. 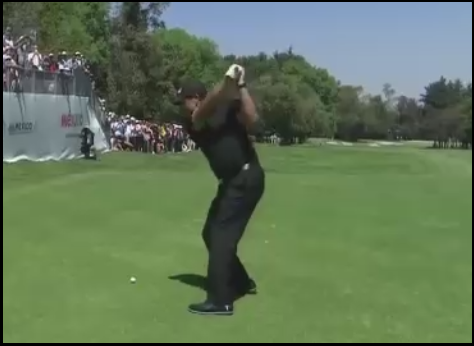 You can clearly see the leading foot moving freely with the lifting heel on the back swing in the very first swing in the clip at the 00:05:00 mark:

So, a guy who will be 48 this year just beat a kid half his age in a playoff in a WGC event, and the only reason he’s still out there playing and winning is because he didn’t destroy his body swinging in the Modern Golf Swing style.

He actually underwent hernia surgery not too long ago, and I was suspicious at the time that Phil had injured himself swinging with a planted heel in his many tinkerings, but as you can see, he’s back to swinging the way he won all of his Tour events and majors – with a mechanically-sound Classic Golf Swing!

Look At A Hole-In-One – This Kid Has No Hands

I kid you not – the kid below is playing golf (thanks to Welshman for sending me this today), even though he doesn’t have hands – and how is he doing it?

Of course, he’s swinging using his body to pivot and swing the club, and I would say to look at four things that are hall-marks of what I consider an MCS Golf Swing type of motion:

A hole in one with no hands?! Are you kidding?!
This might be the most awesome and inspiring thing I’ve seen for a long time! pic.twitter.com/W7d80tv2i4

So, there is a lot of evidence out there if people want to look for it – the proper, natural and mechanically-proper way to swing a golf club is to do it with the body, not by twisting the shoulders and torso against restricted hips.