If you are still fighting the feel of the optimal and mechanically-correct address stance, you really need to look at the address stance of the greatest major champion of all time (and 3rd all time in total Tour wins), one Jack Nicklaus.

I have spoken before as well that you should be careful when looking at Jack’s swing because, likely due to the fact that he spent so little time practicing and playing (he did bear, after the nickname of “Legend In His Spare Time” and the reason for the post thumbnail above), he got away from his most solid fundamentals from time to time before getting back to basics.

If you look at him in the 60’s, you’ll see his address stance that I’ve put beside my own stance, both actual swings, and you can see the striking similarity between Jack at his youngest and strongest as a major champion, and the MCS address: 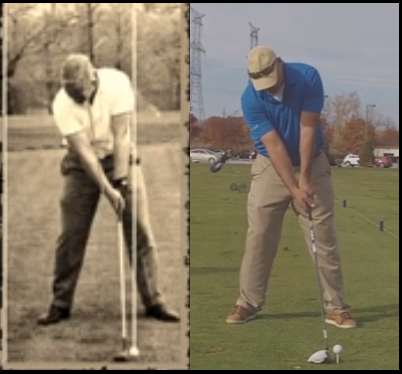 And to show you how consistent Jack was on the proper address, here is his address stance as indicated in his later years when he talked about it, again beside my MCS address from another actual swing:

So, going all the way back to the “MCS – Dropping The Hammer” video from late 2016, which would give you the setup procedure that I was using in the first comparison pic, and the stance just above is from when I was working on the “E = MCS” video from last spring & summer, you have the way to set up exactly as I have in the two comparison photos.

Even better, I went back to the original MCS method of “measuring” the two sides in the stance with relation to the ball or impact position in “E = MCS,” and that was what I used after the season ended to figure out that my setup was slightly off the optimal, so you’re in really good shape with getting the setup properly address, excuse the pun.

I’ll give you all a little secret that’s not really a secret – the better your stance and right-tilt in your setup are, the easier it is to get into the leading foot on the down swing and to generate that effortless leverage that comes from the pressure transfer in the feet as outlined in the “Pressure Plate” concept from “E = MCS.”

The major danger is in not keeping the shoulders squared to the target line on your setup, as well as not being biased or tilted enough at address – if you think my setup is extreme, just look at how the G.O.A.T. set himself up.

Because, if you disagree with MCS on the setup, you’re arguing with Jack Nicklaus as well!

If you aren’t there, it will feel very strange, but as with any swing change, you have to stick with it until it feels natural, because any other way is not optimal, however comfortable it feels.

I used the “Address-Impact” procedure from “E = MCS,” and now that I’ve been doing it for a few weeks, I can set up in the perfect swing position (for me) without even doing it, because the more you do it, the easier it gets to find when setting up over the ball.

Back to the eBook

2 thoughts on “Look At Jack Real-Time & Demo At Address”