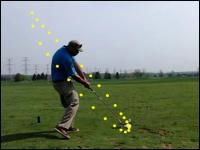 If you’re wondering why it’s so difficult to properly apply gravity in your down swing, then it’s likely because you’re interfering with it due to rotation, which is the true enemy of the so-called “gravity drop.”

I even use a term in the MCS mechanics – “Drop & Pop,” which practically tells you of the use of gravity in the down swing.

My previous bane, heretofore, was always the turning into the down swing which, for many, can cause either the over-the-top or the left-pull, depending on how steep or flat your down swing plane is, and for me, it was the steep over-the-top rather than the pull.

Now, I am likely to pull rather than slice if I turn into the down swing, because I’ve shallowed out my down swing plane, but if you are getting a very high trailing heel into impact: 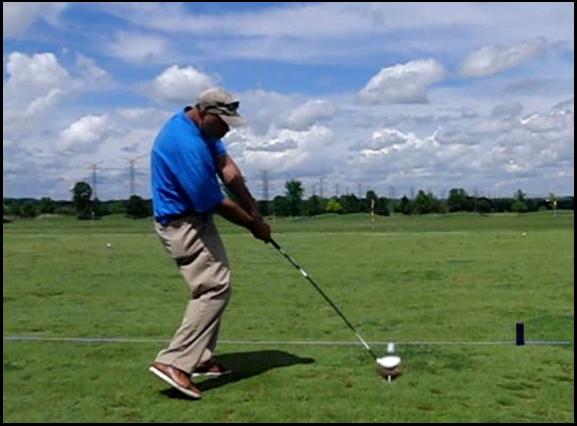 Rather than the lower heel impact position: 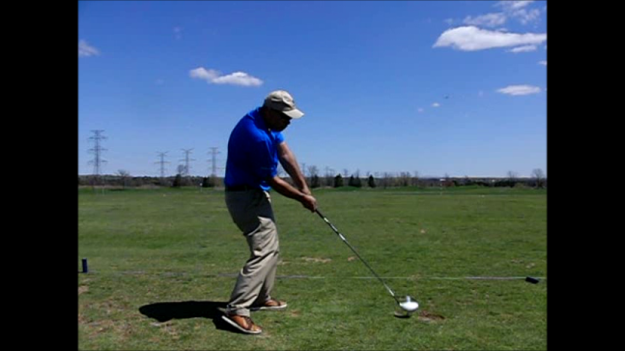 … then it’s because of the rotation of the hips pulling that right heel up due to that very rotational action.

Probably the only thing I see or hear on TV when talking about impact with which I’d agree is the emphasis on the low trailing heel at impact, but that usually is occurring as the swinger remains too far back on the right side and fails to transfer to the leading foot properly.

The last remaining work I’ve been doing on my own swing is that exact thing, getting my positioning down (it’s almost always that, if you’re paying attention) so that I can properly drop the hands and club using both the leverage of the leading side shift and gravity, for the most efficient, leveraged and powerful action through the swing bottom.

Kind of like this, looking at Mike Dunaway’s action through the ball:

This is another reason I am fervently against the whole concept of “swinging left,” which I have called a back-breaking move – if centrifugal force is swinging the arms and club out to the right as the shoulders turn back to square, you’re placing a lot of twisting forces on the lower back as you try to force everything both down and to the left.

You’re fighting powerful forces doing that, and as I’ve already pointed out, the swing is a natural arc, whether you’re trying to turn left or not, and the club will go left all by itself post-impact:

So, there are natural rotation forces that you harness on the down swing, but any conscious effort to rotate through this phase will likely result in over-rotation which will rob you of natural acceleration that you harness just swinging “down.”

This is part of why, if you’re doing your Kettle Bell “One Exercise” drills to work on your down swing sequence, it’s a great benefit to let the weight “swing itself” as you come down, and the whole “3 To 9” and “Impact & Release” part of that exercise is designed to get you into less rotation and more gravity coming down.

I’ll be expanding on this in the upcoming “MCS Golf Swing” eBook, of course, including my personal experience with the gravity vs rotation issue – but if you’re doing your “One Exercise” from the “EMCS2 – The Follow-Up” video, then you’re already working on it.