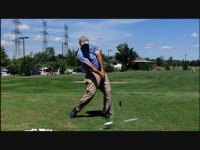 All you have to do is watch the “down move” or what most people call the transition at the top from back swing to down swing, to see how the Modern Golf Swing has lost the natural leverage that the Classic Golf Swing models contain(ed).

I used to talk about a “left foot stomp” (for right-handed swingers) years ago, to try to convey the leveraging aspect of beginning the down swing, but you really could just call the move “stepping into it,” just as you’d phrase it for throwing a ball or punch.

“You have to really step into it,” you’ve probably heard a million times if you’ve played certain sports, and the golf swing should be no different.

First, take a look at how the Classic Golf Swing enables one to “step into it” during the transition:

And then, if you look at the modern swinging players trying to generate leverage, you see the lack of the natural leverage and the attempt to get it back in the jumping/twisting leading feet of many players today:

You’ll notice that there’s no “stepping into it” move from the modern players – and that’s because they’ve frozen or restricted their hip turn and have no “step” to make back, because that train never left the station!

As I’ve said, it’s not the amount of heel lift that makes a swinger leveraged, but the full and free hip turn on the back swing pivot, and some swingers can generate a great hip turn and thus powerful leverage without a big heel lift to speak of:

I’ve described the twisting/jumping leading foot as being the product of different things at various times, such as

These are all problems that can and do arise from the Modern Golf Swing method of using the upper body to turn the shoulders rather than the hips and legs.

You can get any of the above three problems with a Classic Swing, if you fail to properly transfer to the leading foot coming through the swing bottom (and the Kettle Bell “One Exercise” with the “3 To 9” drill will alleviate this problem if you have it), but it’s almost guaranteed to happen with a modern swing model, however powerful a swinger you are.

And it all stems from the modern method of “Big Arms, Little Legs” rather than “Big Legs, Little Arms.”