Let me show you all an illustration from the cover of the man once called the greatest golf instructor on earth, one Tommy Armour, just to show you what the Modern Golf Swing world has lost.

The point I’ll make afterward is simple – that proper methodology was the Classic Golf Swing methodology, and what was proper then should still be proper now, although sadly, it isn’t.

While looking for a stock photograph of my old Tommy Armour 745 Silver Scot irons (you’ve probably seen the composite metal 845’s that were brought back after T.A. discontinued the original 745’s, but the originals are pure stainless steel, and I still use the 4 iron), I came across this: 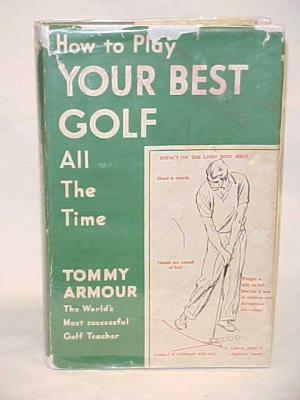 Now, just look at the illustration on the cover, and it’s not a Michelangelo, bear in mind, but adequate to convey proper position at impact, and what do we see?

In no special order:

Aside from the very last point, which is the only thing I’ve seen espoused as proper on television and in magazines, every other single point of my observations has either been lost in Modern Golf Swing philosophy, as in ignored or not taught, or has been contradicted by modern convention.

If you’ve watched golf instruction and the close-to-useless swing analysis during tournaments, you’ve no doubt heard a good deal about standing with a vertical spine position (“centered,” they’d call it) or even leaning left (Stack & Tilt & other models of the same ilk),

If you’ve watched the same, you’ll have heard that you want level or near-level shoulders both at address and at impact as you “turn through the ball,” which is exactly the way to get the low-skilled player to swing left and over-the-top, and yet look at the above diagram and the two legends of the Classic Era below:

Want a psychedelic trip? Watch Nick Faldo try to describe the shoulders at impact below, talking about keeping a “high right shoulder” which would mean level or near-level shoulders:

Do yourself a favor and watch the entire clip if you want to see how crazy all of this is.

Sir Nick sure talks a good game about level shoulders and turning through the shot, and Michael Breed is there of course to agree that a low right shoulder is bad, yet look at Faldo’s impact position in ’94, when he’d already won 5 of his eventual 6 total majors, and in his prime: 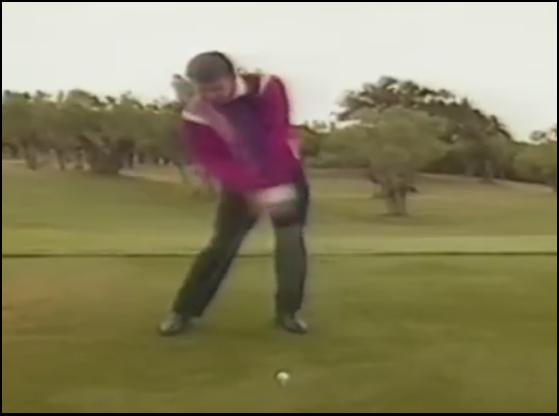 Pretty much exactly what the doctor ordered, isn’t it?  Right-biased head and spine angle, much higher left than right shoulder, low trailing heel, weight firmly into the left side and foot…

So, keep on listening to that Modern Golf Swing garbage if you want to struggle with your swing – and it’s provably garbage – the guys pushing it don’t even do what they tell others to do!

Time and time again, I’ve seen people on TV telling others how to swing in a way that they themselves never have swung… and never will.

That makes it garbage.

2 thoughts on “The Proper Method Has Always Been Proper”