For those of you looking for that awesome leverage demonstrated by the likes of Jack Nicklaus in his heyday, I have good news for you.

It can be naturally produced with the simple equation I’ve given you in the post title.

Simply put, the “floating pivot” that I’ve coined to describe the nature of a proper back swing pivot using the hips & legs, combined with a stable head, can give you not only the consistency of a Ben Hogan (whose pivot I called the “perfect pivot” because of his action) but the powerhouse leverage of Nicklaus.

I can also show you you something that today’s modern golf swing pros have lost with their discarding of proper mechanics (i.e. the Classic Golf Swing with free hip action and a leading heel that isn’t nailed to the ground), with a swing from Jack Nicklaus.

Below, you see Nicklaus at his best – I’ve said for years that while he had an awesome swing in its raw elements, he could get a little sloppy with his technique or stance at times (probably because he spent more time fishing than practicing), but at his best, he was every bit the G.O.A.T.

Now, we all know how much power Nicklaus had, and even though he seems to be really going after it in the above swing, look at how quiet his head is during the entire sequence from the start of the back swing to impact.

It barely moves during the back swing pivot, and here is the formula from the title – if you can swing with freely turning hips and use that aggressive move into the left or leading side, and you can do that with a stable head, you will generate awesome leverage in your down swing and do so in a consistent and repeatable manner.

This is the essences of the “floating pivot,” because it not only helps you with leverage and power, the nature of the stable head will give you greater consistency and repeatability, as proven by Ben Hogan with his own (and revolutionary) “floating pivot” action.

… and also in theory, as shown in an actual swing of his, again shown beside my MCS Golf Swing stance:

As for what modern golf swing players have lost: 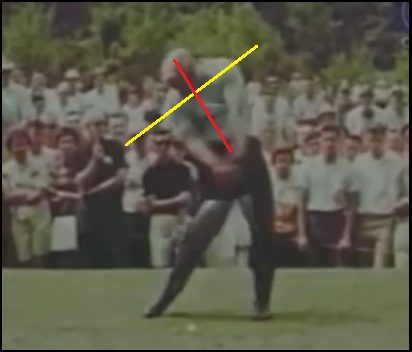 On the weekend, every time Tiger Woods lost a drive to the right it seemed, I’d hear someone saying, “he got too high with the left shoulder, got stuck and blocked it right…”

To which I point out that a proper golf swing impact has a very rightward tilt to the spine as you see above, and a much higher left shoulder than right, which is actually the case even before you swing, looking at Nicklaus’ address position above in both theory and practice!

So, today’s players are trying to swing with level shoulders and you get the back issues trying to do this while still having a right spine tilt, which requires contortion – look at Nicklaus’ spine vs shoulders above and you see a nearly perfect “T,” which means there is no contortion occurring – the shoulders are matched with the spine angle.

Today’s players are also hanging back on the right side and not releasing the trailing foot, and they’re not using the hips & legs on the back swing for a naturally-leveraged “floating pivot.”

In short, Nicklaus had it right when he trashed the idea of restricted-hip pivoting over 40 years ago, and he’d be correct saying it today.

So, all of which I’ve talked about is in your MCS videos, every one of them since the “MCS – Ultimate Leverage” from three years ago to the latest one, the “E = MCS” swing video from last spring.

I’ve left nothing out, and if you’re struggling with any of the above aspects in your swing, remember your “One Exercise” and discussion on the stance and the 3 Levers in the supplemental “EMCS2 – The Follow Up” video.

As I said in EMCS2, most problems with the swing come right off the bat with the address stance (you have to get it right), and then you can simply use one of the various parts of the “One Exercise” with your Kettle Bell to iron out the actual mechanical action.

Everything you need is in the MCS video materials and I’ll be wrapping all of it up in the upcoming eBook “The MCS Golf Swing.”