This is a little clip from the four hours of video that I shot last summer and fall with David D.

Of course, everything couldn’t make it into the final cut of the “MCS – Dropping The Hammer” video, but here’s a little out-take that will be familiar to the old hands. 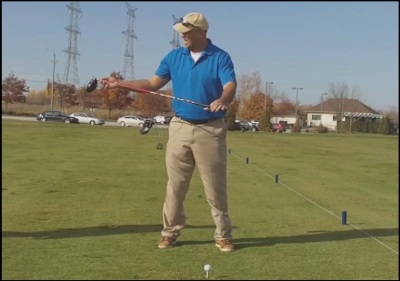 The problem with “pullers” or people who tend to try to swing to the target is that the ball isn’t at the target, so the instinct to do so will cause a lot of problems in the golf swing, from turning early or delaying the release to try to stiff-wrist the ball, and other things.

So, if you think of the shaft being hollow, you might get the meaning of both terms which seem contradictory – “The swing is finished at the bottom, but you swing through to the finish.”

“Hollow Out Your Shaft…”

And all that means, is that the swing should be finished at the bottom as there’s nothing you can do to the ball after it’s been struck, so any effort after that point is wasted or leaked power, and the whole idea of swinging “through to the finish” is to simply let momentum carry you around.

So, the two terms are not contradictory, you have to know the difference between when the powering phase of the swing is finished (at the swing bottom), and when the motion terminates (at the finish).

This principle works very well with the “Dropping The Hammer” concept, so try it out!

Now, I didn’t change a word of the original posting, just to show you that the “E = MCS” video from July was not something new, but rather a further refining of all of my previous MCS videos down to the most basic element.

For those of you who took advantage of the discount that Kate from SwingRite is offering Wax Golf readers (or perhaps you already had one before!), this is the concept that best works for swinging your SwingRite – swing for the bottom.

Over the years, the concept of the proper impact & release has always been intended to produce that “3 To 9” action that I articulated in “E = MCS,” and you’ll notice that the same thing applies to the Kettle Bell “One Exercise“ from “EMCS2” – whatever concept you want to use, it’s the same action.

So, in earlier times, I talked about “throwing” the club shaft into the ground like lawn dart, about a foot or 30 cm ahead of where the ball would be on the tee for a driver swing, then I talked about throwing a golf ball at the ground on that 45 degree angle from the top.

Last winter, I  produced the video clip above, which is to think of a hollow shaft out of which you fling something (think candies or marbles) out of the shaft into the ground at the leading foot.

Do The Same Thing With Your SwingRite

Now, take your SwingRite and use that same concept to try to make the click ring fall off the SwingRite into the ground around the same position as the ball, or even that you’ll let go of it (I wouldn’t actually do it) and have it stick into the ground.

That is your swing bottom, there is your impact and release, and that is the visual I use when swinging my SwingRite to get that “3 To 9” action.

If you’ve set up your address properly, the pivot and down swing will do the rest!