First, I have had great feedback from a good many people regarding the Kettle Bell “One Exercise” from the “EMCS2 – The Follow Up” video, thanks to all.

I’ve said it before, and I’ll say it again – the “One Exercise” is a cure-all for just about any problem with the swing between back swing and finish.

On that note, it is perhaps only because I developed this exercise for people learn and train proper down swing leverage that I noticed something very interesting when I watch Mike Dunaway’s “stickman” gif. that I made a few years ago – the nature of the “pull-pull” in true leverage standing out quite clearly, in fact.

For those who don’t know of him, Mike Dunaway was the father of modern long driving, in addition to being Callaway Golf’s tester for the eventual “Big Bertha” driver, and while you wouldn’t think that swing above is a “long driver’s” swing, he simply made it look easy with his superb mechanics.

I like to use Dunaway because his swing model was nearly identical to the MCS Golf Swing theory, the only difference really being that he addressed the ball with a center-biased position for the most part, which caused a shift of the head to the right on the back swing (I don’t like a moving head in the golf swing for consistency and repetition reasons), but as I’ve pointed out, the above swing gif. shows Dunaway with a right-biased stance, so even better for me to show things!

While I’ve pointed out that the hips & legs drive both the back swing pivot and the leveraging of the golf down swing, I want people to think about the “One Major Move” that I introduced in “E = MCS,” and to combine it with the concept of the KB “One Exercise,” because they’re actually related.

Before I get to the gif., here’s some feedback I got from our old friend and WAX Nation co-founder (Southwest Chapter) DKondo, who had a right shoulder replacement surgery a little more than a year ago, and who was part of the inspiration for the “One Exercise,” as a matter of fact.

Below is a swing gif. from January 2016, when I got a chance to spend a day with DK and others on my trip to Southern California… he had a great pivot action going back and really leveraging that club coming back down – I might add that DK is 65 years young and was hitting the ball as far as he ever had last year before the surgery!

He was very unhappy about the loss of power and distance since the operation, and we were trying to figure out how to recover his strength and mobility in the right shoulder and arm – the first thing I came up with, using bungee-cord-type exercises, I didn’t care for.

I came up with a down swing leveraging exercise for him to work on with the right arm and shoulder (I used my Kettle Bell, but DK had something else at home that was similar), and he was the first to try the exercise.

He emailed me yesterday on his continuing progress, and I was very pleased to read what he had to say, which goes in part:

… with the One Exercise I have seen one very interesting development. I am now getting my right shoulder through the shot much more because of the exercise and all of a sudden my distance is coming back.

The iron shots are so much more solid too. My right shoulder would stall and I would have to flip. I noticed some… longer hitters getting that shoulder through and with the exercise. I now see it in me, maybe for the first time. I think the exercise is breaking loose scar tissue…

And that is exactly what I was hoping for him – increased strength and mobility, and to break up that scar tissue to get him swinging freely again, but in a safe way, which is how you do it with progressive weighting on the “One Exercise.” 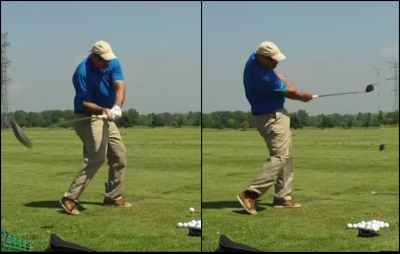 … and of course, to teach how to get through all the way onto the left side to avoid the jumping/snapping of the leading foot and leg, which is reaching epidemic proportions on the Modern Golf Swing side of swinging as you can see on TV week-in week-out.

Which brings me to Mike Dunaway and the “stickman” gif. – if you watch it closely, and you’ve viewed the “E = MCS” & “EMCS2” videos, you’ll see things that I will point out:

1 – How Dunaway seems to be “pulling” the hips and lower body around using the right arm action – that’s the concept of the “One Major Move,” remember!  By not restricting the hips and with the use of the right arm, he performs a great back swing pivot with a smooth coiling action, like drawing back a bow-string slowly but firmly,

2 – When he reaches the top, you see that great hip & leg action begin to pull the entire hand, arm and club assembly down into the “3” position or what Jack Nicklaus called the “hitting zone,” and it’s the same action that you’ll get using the “Pressure Plate” concept combined with the leveraging part of the “One Exercise,”

3 – As I mentioned in a prior posting, Dunaway’s down move and extension through the bottom, the “3 To 9” action with the low heel impact and no early turn, is exactly what DK was talking about with his increased mobility, and what you’ll get when you practice your “One Exercise” in the manner I’ve described in “EMCS2.”

And that’s why I’ve said that, whether you’re right or left-dominant with regards to how you swing, the back swing should be the same for everyone – the “One Major Move…”

And if you’re having issues with that concept, I suggest going back to the “E = MCS” section on that, and also getting that Kettle Bell out and working on your “One Exercise” for not only the back swing pivot and the leveraging but also the “3 To 9” part!

If you watch Dunaway’s gif. with that in mind… I bet you’ll see it!