I have loved the swing gif. of a Mike Dunaway swing for years since I made it from a video clip showing his model in motion, and here’s another reason – you can see clearly the “3 Levers” at work in his down swing.

You can watch the three separately and the reason Dunaway was so effortless in his action is because he synced them flawlessly.

And because the one thing I disagree with regarding Dunaway’s model is in his centered bias and shifting head (for consistency and repeatability reasons that have nothing to do with leverage and power), let’s take a look at just the down swing from another angle:

You’ll remember that the 3 Levers consist of 1) The shoulders and leading arm, 2) The power or trailing arm and 3) The wrists, all of whose functions I went through with you in the “EMCS2 – The Follow Up” video.

Here’s the gif. I have like so much over the years:

So keeping them in mind, watch them separately in the gif. that I like so much, slowed down and from the top to the “9 O’Clock” position:

With the 1st Lever action, it’s exactly what I’ve described with the hips & legs actually driving the shoulder and leading arm action as Dunaway transfers and sets into the leading leg, and from the “3 O’Clock” position, you see the 2nd and 3rd levers coming into play to take the club to “9 O’Clock.”

Very simple, incredibly leveraged and the ironic thing about this gif., in comparison to all of the other Dunaway video swings I’ve seen over the years, this particular swing of his has the MCS right-biased setup!

You can see clearly the tilted rightward spine and the head position where it is… that, my friends, virtually mirrors the MCS setup, would you not say? 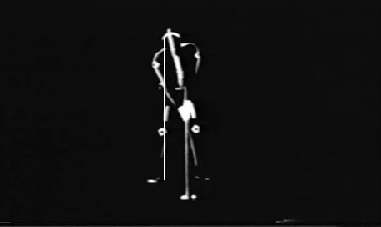 It’s not as right-biased as Nicklaus and I are below, but I would say that if Dunaway had a little wider stance in the above setup, it would look like this: 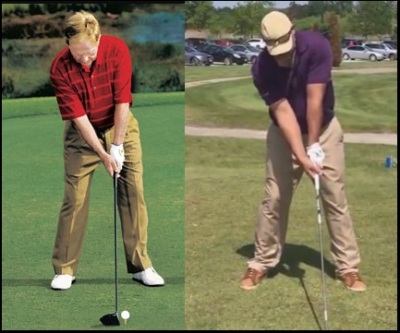 That right-biased setup of Dunaway’s in the stickman swing gif. is likely why it has appealed to my eye all of this time, because that’s how you really are supposed to set up to swing a golf club with mechanical-correctness.

So it’s ironic to me that the only nit I’ve ever picked with Dunaway’s swing model was the center-biased stance and shifting head, but there was at least one of his models that nearly nailed the MCS setup, at which point the swing models are now practically the same.

I swing with a higher heel lift than did Dunaway, but the model I’ve developed has the same down swing action in theory as Dunaway’s swing gif., and of course, anyone can swing this way if they master the concept.

The huge breakthrough for me this year was the development of the “3 Levers,” the “One Major Move” & of course the “One Exercise” concepts which have taken the swing model to its optimal conclusion.

I also personally solved my issues with swinging along the lines of the model with my scoliosis and left-handedness, to swing not too badly myself according to the model:

The below swing gif. is as close as I’ve come to Dunaway’s actual action through impact and that was last July.

The only complaint I have is that the swing was a consciously performed swing, and it wasn’t unconscious – since then, with my work on the Kettle Bell, the SwingRite  and the “One Exercise” from EMCS2, I predict that I’ll be able to replicate his exact action through the swing bottom as a natural and unconscious action when it comes to the low-heel impact and step-around finish.

I’m not after this action for the sake of doing it, but because it is the taking of the MCS Golf Swing theory to its ultimate and optimal action, which as I’ve said has Jack Nicklaus’ described setup (see above compared to mine in the setup pic), Ben Hogan’s “floating pivot” action with the hip & leg action and Mike Dunaway’s down swing action from the top to the finish.

Get that right and you will have the MCS Golf Swing model as I’ve developed it, and while I’ll never let good be the enemy of perfect, I’m after the personal goal of making my swing as mechanically close to perfect as I can.

Like I’ve said, a model can be perfect, and while no person will ever swing perfectly, the closer you get to the model (and you can get close enough that the naked eye wouldn’t be able to tell the difference), the better you’ll strike the ball, and the better your golf game in that regard will be.

Next year, I’ll be closer than I was this year.

Well, not to give out a secret… but we’ll know in a few months when golf season re-starts for the ’18 season!