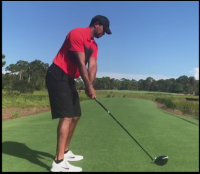 Thanks to everyone who emailed on Tiger Woods’ Instagram post of his driver swing – nothing like the sound of cicadas in the background to bring back childhood memories of hot and hazy summer dog-days!

So, since you asked for my thoughts…

As far as the swing itself goes, I don’t have much to say about it other than I hope he was swinging to produce a big left-to-right fade, because that takeaway was way outside and that ball seemed to be left going left (unless, as I said, it was a big cut he was hitting).

First, of course, the swing:

Going by the foot and shoulder lines, it appears the camera was perfectly situated on the down the line angle, which would make the take-away very outside and the resultant ball flight to be left:

I am keeping in mind that he could have been set up with a slightly closed stance (foot line looks very square if perfectly dtl), but basing my opinion on the the hooded face on the takeaway, the flight-line vs foot-line and post-swing reaction (no club twirl, and staring after it), I think the ball went left of where he was aiming.

Again, like the iron shot we saw last week, nothing terribly dangerous here with the ease of the swing, but he’s still twisting the lower back even on this less-than-100% effort.

A swing like that isn’t going to play on the PGA Tour, unless TW plans on hitting mid and long irons to every green, and the interesting part will be when he begins to ramp it up to 115-120 mph impact velocity for a possible return.

Then, he’ll have to be a lot more vigorous on the transition, and that looks very much like the “swinging left” stuff he was doing with Sean Foley all those years that wrecked his back to begin with.

But I repeat, I wouldn’t read a lot into a few easy swings now.  The crucial period is where he begins swinging as hard as he intends to swing in competition.

So, I’m not very confident he’ll make it back with an outside-in swing like that.