You have pseudo-experts in the athletic field advancing a theory of producing power (by restricting the largest muscles in the hips and legs on the back swing and replacing that with a twisting of the lower back to produce the shoulder turn) that would cripple people in other sports (imagine trying that to throw a javelin or shot-put, or to swing a baseball or cricket bat).

You also have people claiming things that are simply untrue, such as that the Modern Golf Swing gives people more power than the Classic Golf Swing of old.

And that, my friends, if you don’t realize it, is so completely untrue that it is laughable – the reason people are driving the ball ever further distances is because of factors that have nothing to do with Modern vs Classic:

And when you take all of that out of the equation – there’s one fact that you can’t dismiss, and that you can only spin away if you are determined to not get it:

The longest and most powerful drivers in the sport of golf long-driving are swinging in the Classic Golf Swing style, with very few exceptions (and those exceptions prove the rule).

If you wonder why no one has conducted testing of “Classic vs Modern” in power production, you will be happy to know this testing goes on all year and you can see the results in the annual World Long Drive Championships! 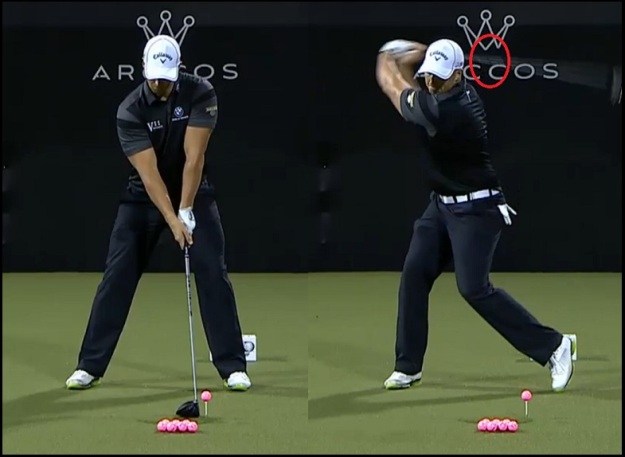 If 9 out of 10 long drive competitors are swinging with full and free hip turns and “floating” or separating leading heels – there is no argument in this world you can make for the Modern Swing models producing more power than the Classic ones, unless you are being disingenuous.

But there’s a problem here as well – the minute you talk about the Classic Golf Swing producing more natural leverage and power than the Modern Swing, you’ll have the goal posts shifted when the modern proponents simply turn and say, “Well, even if that’s true, the Modern Golf Swing provides more stability, accuracy and consistency, so the trade-off is worth it…”

And that, friends, is either a bold-faced lie or the claim of someone who has no idea that they’re woefully wrong.

If I asked you which field of players at the top of their respective classes in driving accuracy were the highest, either a year in which most players were swinging the Classic Golf Swing style, or from last year – what would you think?

You’d think that, with the “more stable and consistent” Modern Golf Swing, and the added advantages of lower spin balls and the shoe-box sized, more forgiving on mis-hit titanium drivers would be more accurate than the tiny, persimmon-headed drivers and madly spinning balata balls, wouldn’t you?

Well, you’d be wrong, and there’s a reason you never hear about this from the Modern Golf Swing industry: 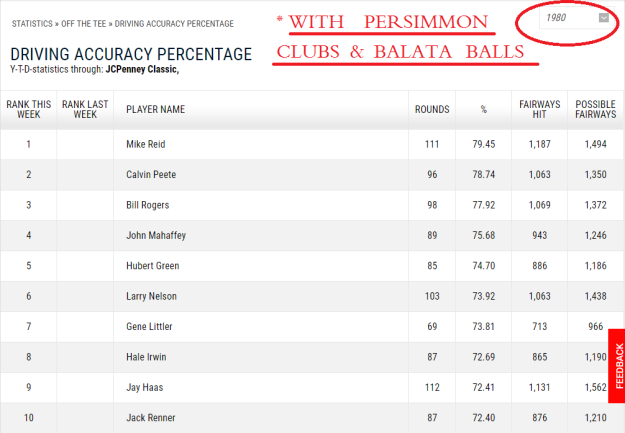 You see that above?  It’s not even close.  How on earth do you account for all ten of the top ten drivers in 1980 hitting over 70% fairways and not even half in the 2016 season getting 70% accuracy?

You can come up with all sorts of rationales for this, but the claim is that:

And neither of these claims is true, as we’ve just discussed.

Now, factor in that today’s golfers are coming down with back, neck, shoulder and knee injuries in their teens and 20’s (one of Wax Nation’s citizens recently recounted to me that now that his son is swinging MCS, he has no neck or back issues but the entire rest of his college team is ailing and spends bus trips with hot and cold packs on various body parts), and the truly horrific toll of the Modern Golf Swing madness has yet to be realized.

You have the man who was destined to become the greatest PGA Tour golfer of all time, and who was likely going to break Jack Nicklaus’ record of 18 majors sometime in his mid-30’s (not to mention that he was likely going to win over 100 PGA Tour events before he was done), who can now not even play golf on any level in his early 40’s due to having undergone several left knee surgeries and four (count them) four back surgeries, the last of which was the “Hail Mary” spinal fusion, which is isn’t good at all, if you didn’t know that.

This, when Jack Nicklaus was winning a major at 46 and when Sam Snead was winning Tour events into his 50’s, both of whom were “power swingers” and not easy-going plunkers (in case someone wants to argue that they weren’t swinging hard enough to injure themselves, because Nicklaus and Snead were both the most powerful drivers of their separate eras and routinely drove the ball 300+ yards with persimon and balata), and when most of the world’s top players (in their 20’s and 30’s) have already missed significant parts of seasons with injuries.

At the end of the day, I can only tell people what I’ve learned in my own 12 years of empirical swing research and how many different people who were on the verge of quitting golf altogether have found new life with taking up my MCS Golf Swing model, which is an optimal Classic Golf Swing action, because the modern swing was tearing up their backs.

Or the many people who were struggling with consistency or power production and are now driving the ball longer than they were at half their age… you’ve read the comments and testimonials on this site and the other blogs I’ve managed over the years.

The results are in, and they do not show the Modern Golf Swing to be anything other than a fiction of the industry, using principles of motion and swinging that you will never see anywhere else in sports, because they are, simply and without bias (I go with the facts, regardless of my opinion, and I actually began my swing research swinging in the modern style!)… BOGUS.

This is true now, and will be true years from now when the Modern Golf Swing has faded from magazines and television, and when the now-young generations of modern swingers are hobbling to therapy and recovering from their latest back surgery in their middle to later years.

A wholly preventable (and therefore even more tragic) disaster…