It seems to me that, due to the modern golf insistence on using a twisting torso-against-hips type of back swing pivot with a turning action through the impact zone has done more than cause physical issues for the many golfer swinging this way – it has led to the loss of the concept of hip action altogether.

I have said before that even modern golfers swing around the C7 point of the neck – it’s just that they are doing it in a mechanically-unsound manner (trying to rotate the upper body only with restricted hip action) and also in an un-optimal manner.

Mechanically-unsound is what always concerns me, after a youth spent in sporting pursuits – if you’ve participated in a variety of sports, you will know that injury is always a concern, and that’s why sports (except, of course, golf in the modern style) focus on mechanically-sound technique.

Golf, incredibly, has gone the other way, fashioning a dangerous and mechanically-unsound way of swinging, and instead of learning from the multiple injuries to swingers, it seems to be doubling down and saying, “Well, that’s the price of playing golf…”

If that isn’t bad enough – this way of swinging is incredibly difficult to perform even passably – and this is exactly why modern golf will fight to the death to protect this method of swinging – because you will never stop requiring lessons to master a swing action that can’t really be mastered by the majority of swingers – and woe to those that do, because the longer and the harder you swing in this style, the more you’re risking injury to the lower back and other body parts.

The end result of this is that the art of swinging using the hips and legs has been lost. 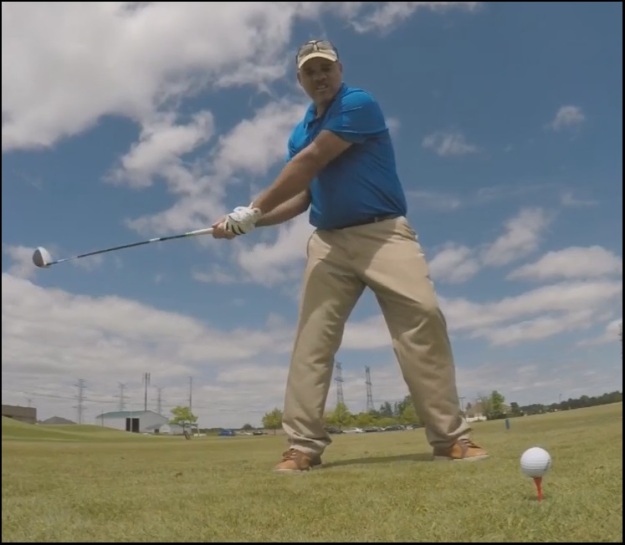 If you are part of the group of people for whom this is an issue, don’t blame yourself – from beginner to instructor, if all you’ve ever seen and been taught and shown regarding the golf swing has been the modern style of restricted-hip action, then you can’t really have been expected to have know any better.

And now, having spent most if not all of your life trying to swing this way, you can’t simply start using the hips and legs to swing, because it runs counter to everything you’ve been taught.

So, what I see a lot when looking at swingers trying to switch back to a classic hip & leg action is either a complete lack of hip turn (even though the swinger thinks their hips are turning), or a complete turning of the entire body away from the ball, followed by a reversal of this turn instead of the “sequential” down swing that is required to leverage and power the down action.

Basically (and I’ll try to get some video in the next day or so to illustrate this), the swing has been turned around?

Instead of a full body back swing pivot and then a sequential down swing (the “drop & pop” of the MCS mechanics), what I see is much of is

This is completely backwards from the proper and mechanically-sound pivot and down swing action, and it all stems from the lost art of using the hips and legs to power the swing from start to finish.

I’m working right now on some drills and concepts to help people release the locked hips, to improve hip mobility, and to illustrate the proper way to leverage the down swing.

The comments I hear most from people who watch me swing in person are that my back swing seems so “slow” and relaxed (because it is, as no one has ever struck the ball with the back swing in a proper stroke) and that the down swing seems so effortless (which would be because I’m using proper leverage with the weight transfer, which is necessary to produce that effortless power as we don’t have gears and motors).

And people simply don’t get for the most part how important drills are for building and then maintaining a golf swing.

You don’t see hockey teams playing full-on scrimmages all practice long to prepare for games, nor basketball teams, nor to track athletes spend their time sprinting 100 meters all session long to train for the 100 m.

And drill some more.

So, standing on a range all day hitting balls is not the way to build a swing, unless you have ten to twenty years to so do, and are prepared to spend hours per day doing it.

The proper way to build a swing, I discovered (and I began that exact way, hitting 6-8 jumbo buckets a day, sometimes, every session) is to DRILL.

So, how’s your back swing? Have you been doing any drills? How about the down swing? Are you drilling the concepts?

This is not to scold, but to implore, because I myself know the allure of intending to practice drills and concepts, only to reach the range, pull out that first club, and proceed to beat ball after ball, to leave the range well-exercised but really no better than when I got there.

I learned the hard way, over a long period, that the more I swung, the less progress I made – but the more I practiced the drills and concepts I improvised, the quicker I improved, and the more lasting the changes were.

I hadn’t hit any balls for a fortnight when I hit the range with Welshman yesterday, and the rust that showed was in my line – I was pushing the ball right with the first iron, but my speed, distance and contact were as good as if I’d been swinging every day.

I even took Welshie’s persimmon clubs, which he practically stole from someone (I don’t even want to say how much he paid for pristine Ben Hogan persimmon driver, 3 and 4 wood complete with purple Crown Royal headcovers), and I pounded them, marveling in how far I was able to hit the range balls with them.

I hit some drivers to the end of the range which, although there was a following breeze, wasn’t much shorter than what I’d get with a modern driver.

The only distance lost would have been due to the fact that they swing a little heavier than the feathery modern drivers, so there would have been perhaps a little slower impact velocity, but I was nutting those persimmons and loving them.

So, because I swing with my hips & legs, I don’t have to maintain my swing form, just as when you learn to throw properly, you can take a month off throwing and, other than perhaps a few warm-up throws to get the feel back, you’re not going to have to re-learn the throw action.

Now, how many people can take a fortnight off hitting balls or playing and then, after a half-dozen swings, be right back where they were before the break?

That is the value of drilling, my friends – with the drills, you ingrain and preserve the action required for a proper swing action, and the more you drill, the better things will get.

I came up with a great (I think) new concept for the down swing transition from the top as well, using nothing more than a short iron and a coin, that will go great with the Kettle Bell concept from the “E = MCS” video:

In addition, an exercise you can perform with a bungee cord or a pulley weight machine at the gym, that will get your hips free and you leveraging your down swing like you never have before.

So, if I’ve been a little quiet on the blogging front, it’s because I’m back at work on the follow-up to the “E = MCS” swing video – not on how to swing, because that video is the simplest I’m ever going to be able to describe how to build the stance and explain the mechanical action – rather, on explaining in more depth the nature of the pivot providing the leverage required to turn your swing into an effortless and powerful action.

Welshman, by the way, had business that kept him from swinging a club for two months, since June, basically, and when we worked on his hip action and the down swing transition (with the new concept), he was transformed.

He went from hitting deep-divot half-fat balls with a mid-iron to shallow-divot, sweeping iron shots and simply jumped off the club face.

And all we did, to get that change, was I drilled him on the back swing pivot hip action and the transition leverage action – two things that I told him to drill at home when he had the time, and when the proper hip action clicked in, that’s how quickly he was able to make the change.

That, instead of hitting ball after ball, because practice doesn’t make perfect, it simply ingrains what you happen to be doing, and if that is incorrect… you’re ingraining improper technique and making it that much more difficult.

So, I know that the proper hip action is stumping everyone, and that is affects everything from the back swing to the finish, but I’m testing some concepts for the upcoming and extended “Cliff’s Notes” type of follow-up to “E = MCS.”

Everything about the swing itself is in “E = MCS,” and I’ve been gratified by the reception it has received.

Now, based on the feedback regarding where people are really struggling with their mechanics, and from what I’m observing in the swing analyses I’m doing on submitted video clips – I’m on it.