I have shown the secret of why even good players have hooking issues to a few people this spring, in person, and the reactions I got from the demonstration were… interesting.

I have been very enthused with this upcoming “E = MCS” video for many reasons, but the addition of more advanced video shooting than my accustomed style has me really stoked.

For example, the concept of the grip and how your address stance makes a huge difference in that grip, and the minute I knew that I might get the use of a Go-Pro camera that clips onto the bill of a ball cap – I knew that this particular concept would be awesome for it.

You see most grips being on the standard to strong side and for a reason – the address largely influences the grip one takes, and even more shocking for some of you, when you get to see the demo in the video, the stance affects what the grip does during the swing!

You had very centered stances in the classic golf swing era, with a few of the better swingers figuring out the right-bias position, and this again has been one of the very few issues with the classic golf swing – it wasn’t right-biased enough, but my theory on that is that even the driver (being persimmon) was usually swung to impact with a little descending angle, to create the necessary spin you needed to make balata balls fly.

The more to the left you are, the more you’re likely to have a steep descent into impact, and that works great for wedges and short irons, but is not optimal for the rest of the set.

In the same way, you’ll be more prone to hooking the ball the further you get from the proper right-side bias, and I’ll show how, using the training grip on my Momentus Heavy Iron: 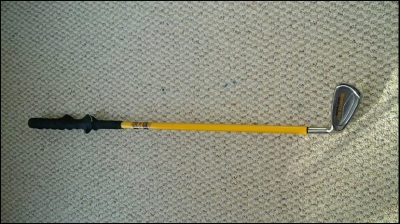 This could actually be the reason Ben Hogan never figured out how to stop hooking the ball, save for all of the anti-hooking measures he employed in his swing, but I would never be able to say for certain, because I can’t discuss it with him.

However, I remember having a very strong grip when I stood with a center or left-biased address position, and I couldn’t weaken it for the life of me, and now I’ve figured out why.

The more right-side bias I put into my stance, the less I felt the need for that strong grip.

So, there have been some very fascinating insights coming to me on the what and why, now that I have satisfied myself that I have nothing more to “test” out regarding the MCS swing model.

What has happened is that, now that my mental faculties are freed to just ponder the swing with regards to the stance, I am getting “light-bulb” moments left and right, not on new things, but on why things work the way they work with the MCS model.

It’s one thing to say, “You need a right-bias for a proper swing, and without it, you won’t swing as well as you could,” but it’s quite another thing to say, “because it will make you prone to hooking the ball if you don’t, especially if you’re a higher-skilled player, and if you’re not, it will also increase your slicing problems.”

That second part is obvious – lower skilled players usually have too steep a down swing plane to begin with, and if you add in a strong grip that closes the face as you’re cutting sharply across the ball (Trackman stuff here), you will either slice the ball sideways or pull-hook it off the earth.

So, I could have just made the demonstration with a close-up camera shot, but the Go-Pro would show, very clearly from the “swinger’s eye” view, what happens with the grip and the address stance – this will knock some socks off, trust me, because the day I was playing with the stance and swinging the training club, I almost fell over when I made the connection.

I’ll be closing out the Advance Orders on the weekend or shortly after (the month ends on Wednesday, and that would be the absolute last day, but orders are still coming in), and I’ll spend the next couple of days giving you all some tasty tidbits on what’s coming up.

Thanks to everyone who has placed their order – every single one is a testament to how much trust I’ve been able to build on this blog, because I’m seeing some new names on my spreadsheet along with the familiar ones.

I promised you all something, and to my great pleasure, each day confirms to me that this will be the MCS swing video to bring it all home, thanks to the time I can spend on this due to the pre-orders.

More to come, and a great weekend to everyone!

7 thoughts on “Why Do So Many Good Swingers Hook? MCS Solves The Mystery”