I have figured out a way to slow down the Mike Dunaway “stickman” swing gif. that I created years ago, and I found his positions to be illuminating.

There was a lot of discussion back in the Mike Austin days of the then-named DJ Watts Golf blog (later changed to Wax Golf when my swing theory diverged from the Mike Austin model in 2013), about their impact positions.

So, here is the slowed-down gif. of Dunaway’s swing for targettom and others who might want to see it:

There were some assertions that the impact was a fully-extended right arm at impact, and I asserted in turn that there had to be some post-impact extension, even a tiny bit, for what I’ll now call the proper “hammering” action through the ball, and it seems now I can provide proof that I was correct.

First, I don’t know what club Dunaway is swinging in this gif. – I would have assumed Driver, but now I’m thinking it was a 3-wood – and if it wasn’t, then it was a persimmon driver or one of the early small stainless steel headed drivers.

That’s because I found this taking a screen shot at the exact moment of impact: 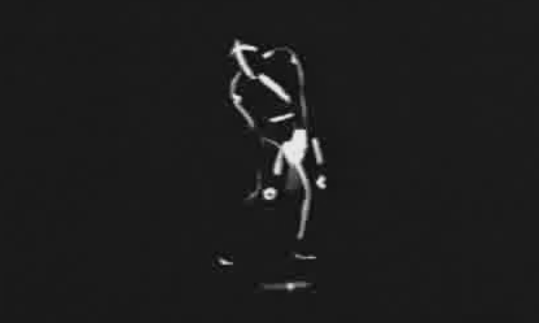 You can see two things in the impact shot above – one, that the hands are slightly leading the ball at impact, which would make it very difficult to hit the ball in this manner with the modern drivers – we all know that they are designed to be swung in a manner to produce a positive angle of attack, and Dunaway’s above is clearly negative.

Compare that to what you would want with a modern driver: 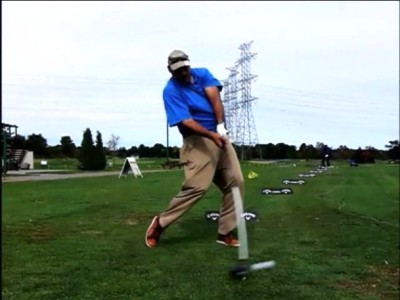 I’m swinging a long-drive club here, but even with a standard length modern driver, you want the hands behind the ball at impact, for that positive AoA into the ball…

If this were a persimmon driver or one of the early stainless steel headed driver, you may have had them built to be swung in the same manner as the persimmon wood drivers, which would be more like today’s 3 woods – even with the drivers in the classic era, you had a negative AoA to create the spin on the ball to keep it airborne.

So, I can only go by what I’m observing.

But again, you’ll clearly see if you look, at the second point, that Dunaway’s right arm isn’t quite fully extended at impact, but nearly so, which is as perfect a position you can have as a flesh-and-blood human being – we want to be machine-like in our ball-striking, but we are not machines, and we will never achieve the same motions exactly.

Here’s something interesting as well:

See how nearly identical Dunaway’s top position is to the one of Hogan and myself using his “perfect pivot” with the “Swinging Gate” that I am always referencing in my videos?

So, Dunaway gets to nearly the same top position, but he had to shift his head to the right to get there (consistency and accuracy issues) and his left thigh isn’t even at vertical, let alone past vertical, and that would be due to the fact that Dunaway never had a high-floating heel on the back swing.

Now, that could have been a mobility issue from his football injury, but the fact remains, with a right-biased address position and a higher floating heel, he would have been even more consistent than he was (and he was a pretty accurate long driver, but his irons and wedges would certainly have been more on-point), and a greater “Swinging Gate” would have given him even more leverage, hence power, than he had with that near-perfect down swing.