I was looking for a good swing clip of Tony Finau today for whatever reason – I wasn’t going to profile his swing or anything, although he’s a prodigiously long hitter.

I was just looking to see what he pivot action looks like, and it’s not bad, but the one thing I learned about anything today while looking at Finau’s “Golf Digest” analysis was – and this is embarrassing to have to point out, I assure you – the swing gurus to the PGA Tour players don’t understand the release action of a proper golf swing…

Take a listen to this swing “analysis” by Mr. David Leadbetter, of whom you’ll know by now I am not a fan:

Did you catch that?  What Leadbetter says at 0:58 of the clip?

“You might say a little bit flippy through the ball but my goodness does he hit it and, uh…”

Uh…no, Mr. Leadbetter – you might say “a little bit flippy through the ball…” because I would call that a proper release. 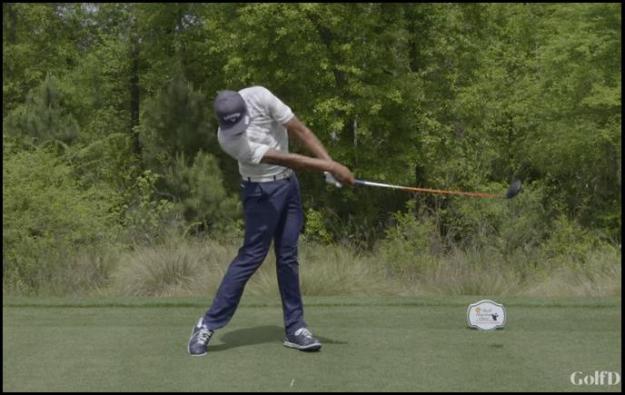 Anyone who knows anything about mechanical action would say that Finau has a very good mechanical release action.

In fact, he could release even a little better, as you can see by the still-extended left arm a good ways past impact.

Far from it, as the only way you can “flip” is to release the club prior to impact or the swing bottom, but as you can see, Finau hasn’t even begun to release in the second frame of the above pic.

Absolutely stunning to hear an instructor of Leadbetter’s stature saying something like this.

And here’s the kicker – the above comparison will tell you why Finau ranked 7th in driving distance at around 310 yards last season while Jordan Spieth languished around 80th place driving it 292 yards.

In effect, Leadbetter is criticizing the exact same thing that makes Finau the long hitter he is – a proper release through the swing bottom, and one that is still slightly held-off.

So, aside from having said nothing constructive instructionally in his swing analysis, Leadbetter wants to take his listeners away from Finau and towards Spieth.